Thanks for reminding me

Hey guys,
I hope everyone is doing good today. I reworked a map previously post on this thread.

This is the reworked version. ^

This is the old version ^
Somethings I changed.
1. Removed African Nationalist. It felt 'too' unrealistic. I like the idea of a much more violent decolonization, but I can work it out better than slapping a nationalist state down. Now the Belgians are there, for a bit.
2. Removed Rhodesia. It's now part of South Africa.
3. Speaking of South Africa, it's now independent from the UK. As well as all of India.
4. Reworked American Civil War. Removed some unnecessary states, and made it look a little nicer (I hope.)
5. Removed Occitania. It was unnecessary, so Vichy France.
6. Reworked British, Italian, and German borders and puppets. To make it look nicer.
I'll probably post a follow up map and maybe make a thread for the rest of them. Not sure.

Finished India, and with it, all of mainland Eurasia.
Placeholder: How do I use Google Photos to upload photos here?

Iserlohn said:
This is a WiP which is in its early stages, with only North America completed. The basic premise is that the United Kingdom and its native allies decidedly win the War of 1812, leading to the creation of the Confederated Tribes of Indiana as a British client state, as well as the annexation of the Louisiana Purchase as a direct British colony and of the US states of Massachussets, Rhode Island, Connecticut, Vermont, New Hampshire, New York, New Jersey and Pennsylvania by the British (this is admittedly very implausible, but whatever).
Click to expand...

I'm pretty sure that actually gives Americans an outright majority of the population in Canada/BNA, looks nice though

You should definitely include the smaller ethnic entities in Myanmar, @erictom333 , also, why aren't the Banjarese counted distinctly? Also, can you explain your coloration in Meghalaya and Kashmir?

Edit: I figured out Meghalaya. The similarity in color to Assam was throwing me off.
Last edited: Jul 19, 2020 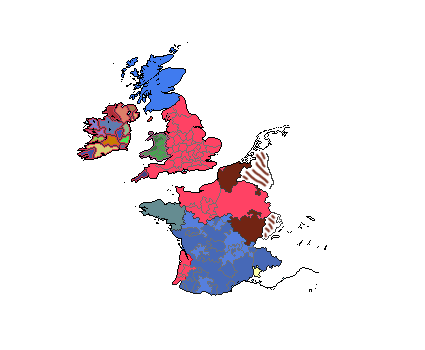 the map ive been having so much trouble with. The british isles are ahistorical but france is meant to be historical. its currently just an iteration on existing work and not at all accurate. you know there are like 3+ conflicting renditions of the burgundian netherlands floating around on the historical q-bam thread?

Part of an attempt to make an at least semi-serious scenario out of an inherently ridiculous source as a challenge to myself. I think I'm doing okay at it so far.

Aliens? Satanists? That Africa? OMG!
Tell us more
(Eurasian alliance... with about half of it beign based in Africa, um...)

Right now I'm on a massive creative high tide and I'm positive that this is going to be the first map I'll manage to post completely finished. It's the same scenario as the one I posted months ago at this point, no islam and all that. So I'm waiting for your opinions!!

Wendell said:
You should definitely include the smaller ethnic entities in Myanmar, @erictom333 , also, why aren't the Banjarese counted distinctly? Also, can you explain your coloration in Meghalaya and Kashmir?

Edit: I figured out Meghalaya. The similarity in color to Assam was throwing me off.
Click to expand...

Here's a map I've been working on for a few days for a fantasy universe Im crafting. Im considering writing some stories about it on the writer's forum once I have enough of the universe figured out. Will be cool I think. When it comes to the map next I plan on doing things like adding more details, after that making a height map, and after that making a biome map

Coming along nicely… Though I'm not as happy with East Asia as I am with Africa or Arabia or even India.

while this map is technically complete it's also a part of the "I Wish I Wasn't in Dixie" world map I'm working on (although I'm kind of wondering whether it would be better to keep them as separate images).

Inspired by a TNO game where I played as a Magadan that overthrew the starting leader and is becoming a American style democracy, a map of the Magadan as the National Siberian Republic, and then as the All-Russian Republic after Germany semi-collapsed. Liberated Eastern Europe under several liberated republics, along with a Russo-Finnish ran Karelia, and various democratic allies in Eastern Europe.

I am working on a couple of maps like this including:
* Sveltlana Stalin's Auth-Dem Komi
* Ultravisonary Komi
* Dmitri Shostakovich Tomsk

Here is something different, based on an online novella that was removed last year. If you read one of my turns in Trapped In Time: A Brave New World, you know which one I'm speaking of.

In the novella, China historically practiced cannibalism (specifically, the consumption of selected 17-year-old girls) as part of their culinary culture, a relic passed down from Qin Shihuang.

The author painted a rosy picture of PRC-era China, but realistically? Disregarding butterflies, once colonialism kicked in, Qing-era China is on a path of no return. I'm killing butterflies by allowing an alt-WW1 and WW2 to exist, but that's it.

This is what I came up with so far:
Free City of Dairen (大連自由市, Japanese occupation, Soviet free port post-WW2)
Commonwealth of Weihaiwei (威海衛聯邦, former British protectorate)
Republic of Kiautschou (膠洲共和國, former German concession, neo-Nazi reactionary due to a stab in the back betrayal by West Germany in the 1960s)
Kingnan Free State (荊南自由邦, fully democratic state, wedged between Communist north and Nationalist south)
Bouxchuengh People's Republic (佈僮人民共和國, Guangxi without the more developed parts. Nationalist and hates Han Chinese for giving a bad name to China)
NANCHANG PACT MEMBERS BELOW (南昌協約, everyone dislikes each other, but they hate the Russians and Americans more. Part of the Non-Aligned Movement)
International Republic of Zånhae (上海國際共和國, alt-Shanghai International Settlement that expanded to all territories that use the Lake Taihu Wu language)
Chinese Union State (中華合眾國, nominally democratic but otherwise Fascist. Hates everyone for the partition of China)
Republic of Formosa (福爾摩沙共和國, Taiwan, but more hostile. Also controls Xiamen/Amoy)
Commonwealth of Canton (廣府聯邦, flawed Parliamentary Democracy, combination of former British Colony (Pearl River Delta) and British Protectorate (northern Guangdong and Nanning Panhandle))
Cantonese State of Heongsan (香山廣府國, former Portuguese Colony that evolved from Macau; Heongsan is the old name of Zhongshan)
Socialist Republic of Kwangchowwan (廣州灣社會主義共和國, former French Colony, and went Communist like the rest of Indochina. For some reason the French hacked Móng Cái off Vietnam and attached it to Kwangchowwan.)

And yes, the PRC would exist, but it would be a developing backwater state that is seeking to suppress its past.
Last edited: Aug 2, 2020

To label colonies or not to label?

Mainly added more flags + modified how the Yugoslavia looks.
Also first real experiment in pixel art for the flags, look at the little Slovakia!
You must log in or register to reply here.
Top
Top