I am a loyal player of Azur Lane. Recently I acquired HMS Cheshire, based on a design in World of Warships, which eqiupped with six 234mm/L50 guns and with a displacement of 15000 ton.

So suddenly I have a headcanon: how would be the "Naval Hoilday" looks like if the limit of cruiser were set as the conditions given in the title? How would the treaty cruisers looked like compared to those historical designs?

SgtRL-3 said:
I am a loyal player of Azur Lane. Recently I acquired HMS Cheshire, based on a design in World of Warships, which eqiupped with six 234mm/L50 guns and with a displacement of 15000 ton.

So suddenly I have a headcanon: how would be the "Naval Hoilday" looks like if the limit of cruiser were set as the conditions given in the title? How would the treaty cruisers looked like compared to those historical designs?
Click to expand...

Everyone would build 15k ton cruisers with 9.2 inch guns. Probably faster/more heavily armored then OTL Treaty designs. Though not sure what the POD for this would be. Historically the WT limit was based on the Hawkins class.

The whole point of the treaty was to save money. It's at least partly thanks to the Hawkins class we didn't get smaller 6" cruisers, it's really hard to see them shooting up to 15,000t/9.2".

To get US on board, probably would want 10", as there wasn't a 9.2" in inventory.
If that size does fit, you would get a brand new gun design, that would give the other Nations an edge over the RN's older gun

CV(N)-6 said:
The whole point of the treaty was to save money
Click to expand...

Well, then you have fewer, more powerful ships, but still have 6". US still spammed out a lot of Brooklyn and Cleveland class CLs despite having 8"

If you wanted true economy, there would have been an overall tonnage cap, like with Battleships and Carriers

Probably the PoD would be rather than getting the 2x18" Furious and 4x15" Courageous and Glorious, that instead they'd been 6 or 8x9.2" or similar, and weren't in line for carrier conversion (let's go with the popular 'convert Admiral class battlecruisers to CV' idea), and the RN had wanted to retain them as fast ocean-going cruiser-killers.

Historically we only got the 10,000 ton 201mm treaty cruiser because of a British desire to retain a few large cruisers (Hawkins class) for distant stations. Most navies were still looking at smaller designs smaller than 8,000 tons and armed with 150mm sized guns. Predictably everyone saw the maximum limit as the minimum sized ship they would build. To get a larger displacement you need everyone to begin building bigger cruisers than the 4-8,000 ton scout scruisers they fought the first world war with.

Maybe a few nations, France? Britain? build dreadnought armored cruisers before the first world war? A few of those types of ships floating around may convince everyone to build ships of that size post war.

Donor
Reasoning for a 15,000 ton 10" cruiser limit is easy enough, the US had built 4 of the things already, just need a POD for them not to be ignored at the WNT. Say in 1915 the four sisters are sailing in company and hit a hurricane, resulting in their lattice masts getting bent to the deck, as happened to USS Michigan OTL in 1918. Since they have to go in for a major repair anyways, it is decided to fit them with new bows and new oil burning machinery for an increase to 25 knots of speed, along with other modernization, though no replacement of their guns as was proposed in 1922 OTL. The US would not want them counted as capital ships at the WNT, because that would mean 3 less battleships, but really wants them as flagships on foreign stations. Meanwhile the Japanese would be opposed to allowing a special exemption for them, as with 12" guns their ACR of equivalent vintage would be harder to get covered, and would require a modernization they did not do for them to stay in service So as a compromise it is decided that 15,000 tons and 10" is the limit, though given the expense you might see an earlier light/heavy cruiser split

Weren't the USN...and RN.....ACR's outside the Treaty in the same way the RN's Glorious and Courageous were and could easily have been kept and modernised as above....IIRC there was something that suggested this on the Battlecruiser board.
Last edited: Sep 26, 2021

All of the signatories were capable of building 15,000 ton 9.2" gun ships before the WNT, but had good reasons not to do so.
The smaller ships were capable of holding there own against cruisers of the other navies, and having numbers was more important than size.
All nations were constrained by budgets in one way or another, so had to make decisions on allocation of available resources.

The 10,000 ton, 8" limit is probably about as high as is reasonable under conditions at the time.
It was driven mostly by the RNs desire to retain the Hawkins, and other nations desire to keep up with them.
Given the cash strapped building budgets post WW1, the RN would probably have done better sacrificing the Hawkins, and getting a 7,500 ton, 6" limit on new builds.

I think having all cruisers built to the maximum allowed spec. came as a nasty shock, but shouldn't have been that much of a surprise.
Getting the limit set any higher than historical runs into another problem.
The smallest capital ships allowed to be retained by France were Condorcet, Diderot, and Voltaire at 19,000 tons, and for Italy Roma, Napoli, Vittorio Emanuel and Regina Elena at 12,600 tons.
Allowing cruisers to be built that were close to or larger than capital ships mentioned under the treaty doesn't make sense.

On 15,000 tons it does not matter who the combatant is but you have to choose armour or gun. The 9.2 inch cruiser could not be armoured against her own shells I think. 8 inch was fairly good in immunity zones.

It would be more likely that the upper weapon limit would be 10in/255mm, since the US and Japan used that calibre. Still, I suspect that the Washington treaty would likely impose total tonnage limits on the category, derived from the Battleship tonnage allocations, but adjusted for the 15,000 ton standard displacement requirement, which would mean the US and UK would get 225k, Japan 135k and Italy and France on 90k each.

The 15 big 10in cruisers would be enough for the detached station Flagship role and ironically, this would likely help keep shipbuilding going better through the Depression era than OTL, as it would likely be argued by the RN that they would have to build all 15 big cruisers because the US and Japan would be building theirs and the UK would have to match them.

That would probably push the smaller cruiser category down to somewhere around 7,500 tons standard, 6.1in/155mm guns and no limits on numbers, which would likely suit the UK down to the ground, since they need another 55 cruisers for colonial policing/trade protection and their OTL design, the Leander would slot right in to that requirement nicely.

On the other hand, because of that 7500 ton limit, the Japanese and the US aren't going to be producing the Mogamis and Brooklyns on that tonnage, so the light cruiser growth in the mid thirties probably won't happen.

In this sort of case, I suspect that the Second London Treaty wouldn't try to reduce the Battleship main armament or regulate the Cruiser tonnages. Japan may actually agree to that and stay within the treaty structure.

Not light, but the USN developed a 9" Hi-Vel Gun

The countries that cheated IOTL would still cheat, they would just have moved the goal posts.

And they would end up even worse than IOTL, as those monster cruisers would be far too expensive without being any better than an OTL treaty cruiser for "cruiser" uses, and a lot less useful than a battleship for anything where you need a bigger boat.

Two design paths that arrive at this goal: 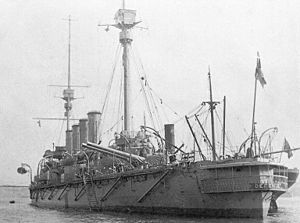 alspug said:
Well even if the 9.4 or 10 inch is allowed I can't see the British going bigger than the 9.2 inch.
Click to expand...

But OTL they ditched 7.5" for 8" immediately on signing, as did everybody else, the max in the treaty will be the normal and standard size and anything else will be regarded as substandard and too small.

alspug said:
On 15,000 tons it does not matter who the combatant is but you have to choose armour or gun. The 9.2 inch cruiser could not be armoured against her own shells I think. 8 inch was fairly good in immunity zones.
Click to expand...

I dont think any early actually under 10,000t 8" ships was well protected against 8" fire and like OTL I think everybody picks guns overprotection?

jsb said:
I dont think any early actually under 10,000t 8" ships was well protected against 8" fire and like OTL I think everybody picks guns overprotection?
Click to expand...

In the battle between armour and warhead, the latter will eventually always prevail.
Inter war they focus was not on ultimate protection, but on having immunity from a single shot loss at normal battle ranges.

The reason the British are likely to stick with the 9.2 as opposed to a 10 inch is that their 9.2 is literally one of the best guns ever made. They had massive range and the most incredible sweet spot for armour penetration. A 10 inch is not appreciable in difference and the 9.2 fits the treasury and needs for large numbers of cruisers. As for the design I could see the 9.2 version being used for the new heavy cruisers as being the 51.35 calibre gun lined down for 9.45 inch. They had the best range however the bore erosion may change this. As for the armour needed thats pretty hard to meet.

If you take those figured you need to give your Cruiser 6 or 7 inch protection of turrets. barbettes and machinery This indicates a Des Moines class standard of Protection. It is worth noting not one heavy cruiser beats the Des Moines on any metric. The Des Moines represent the absolute pinnacle of the Gun cruiser. With her fire control and gunnery I would say she could have engaged ships like the Scharnhorst on terms that ended up with a complete mission kill of the enemy,