With a PoD somewhere between the Treaty of Tordesillas in 1494 and the Treaty of Madrid in 1750, how can we make it so that Spain, not Portugal, attains control of the Amazon river basin? Think Spanish control over roughly the OTL Brazilian states of Acre, Amazonas, most of Pará, Rondônia and Mato Grosso.
What would be the consequences of this? How might Spain administer the territory? Given how the Amazon and tributaries have their sources around the Andes, might the area be attached to the Viceroyalty of Peru? Would Spanish South America gain another useful outlet to the Atlantic or would they have to wait for better infrastructure to guarantee navigability and safety from disease and such across the river?
How might Spanish control over the Amazon tribes differ from OTL's Portuguese then Brazilian control?

How much gold and silver are in the Amazon Basin?

riggerrob said:
How much gold and silver are in the Amazon Basin?
Click to expand...

riggerrob said:
How much gold and silver are in the Amazon Basin?
Click to expand...

Lots of gold in a few places in the Amazon tho, like Serra Pelada. But those places were kinda deep jungle and hills until modern times. Ilegal mining is an issue to this day. I think they would have to reach through the Tocantins river.

The first problem is Tordesilhas grants Portugal control of a pretty small but important bit of the region, the mouth of the Amazon.

The Portuguese took over because of that. All they need is to fill the region with strategically placed fortifications, shoot anyone not called Antonio, João or Miguel, and its theirs. Portuguese take-over of the rest was pretty much a given. Sure, the Spanish tried to fight it, but when Portugal can casually bring guys over from Portugal to the deepest Amazon and the Spanish have to come from the other side, its kinda obvious who is going to win here.

I think it was like a month from Portugal to the North and vice-versa. For a matter of perspective, Belém (where I live) is closer to Lisbon and vice-versa than to Rio de Janeiro. There's a reason Pará is the most portuguese state of Brazil (also, amusingly, the most native american). Heck, Brazil was not even a single colony, it was actually two - Maranhão/Grão-Pará & Maranhão/Grão-Pará, and Brazil. The former was so close, it was under D I R E C T R U L E F R O M L I S B O N.

So my two cents is: You need to hinder or prevent the Portuguese conquest and colonization past Maranhão altogether. The moment the Portuguese take over Equatorial France and build Belém as a bastion of portuguese power, Its over.

Have Dutch northeast remain a thing, for a while or maybe forever. Have a stronger Equatorial France with more royal backing. Keep the mouth of the amazon a playground of ilegal dutch & english traders and pirates. Until the Spanish take interest and decide to colonize it because the portuguese can't or won't. Then they can take down the French.

The Portuguese will definitely take issue with this. This might lead to wars, or Spain ceding some territory elsewhere in exchange - say, Portuguese Sacramento.

I think this would become its own vice-royalty. The logistics don't work to have it ruled from Peru. The capital is going to be somewhere in Northeast Pará, probably in OTL Belém.

Going by this map: 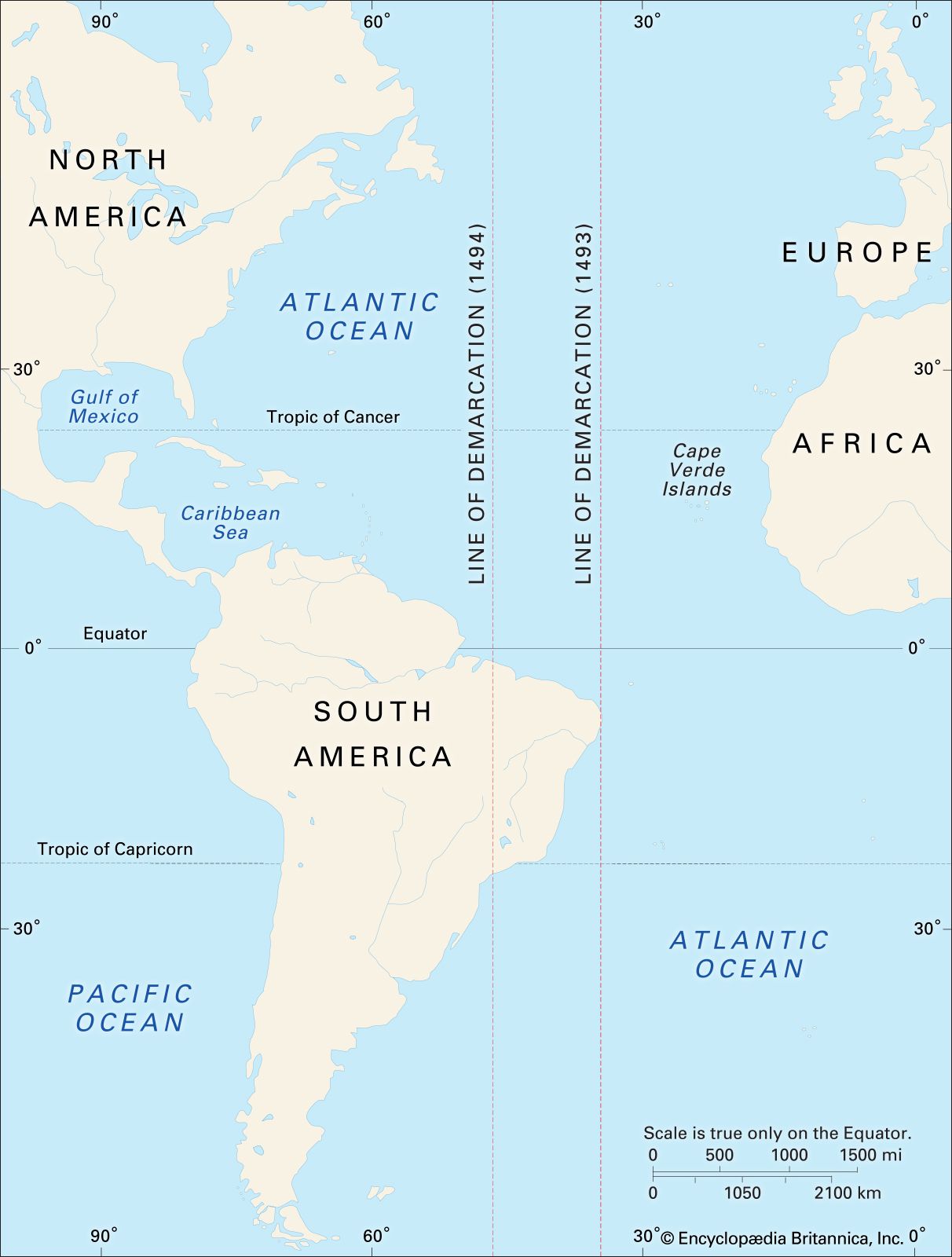 I think hostile relations between Spain and Portugal shortly after this treaty are signed would be an ideal way to get the Spanish in the Amazon and to stay there. As tensions are escalating between Spain and Portugal, Spain starts to more proactively use the Treaty of Tordesillas' original terms against Portuguese colonialism in the Americas during the early 16th century. Part of this involves securing what they view as 'their' land against their rivals, and thus the Spanish set up forts at OTL San Louis and Belem in Brazil. Much like Florida, the region is ignored and barely even populated for the next century outside of the immediate surrounding area by the forts, but the Spanish have come to view control of the Amazon River as strategically valuable even if it is a net economic drain. With the Anglo-Portuguese alliance presumably still standing over the years, the Spanish will likely be somewhat justified in its strategic purpose. And for the sake of simplifying the scenario, let's say that the end result of these colonial disputes favors Portugal in the south and the borders are something roughly similar to OTL. Presumably the Spanish hold Rio Grande Do Sul at most because they'd on paper have set up forts further up north that they'd have 'lost' over the course of these colonial conflicts.

If/once policies shift and silver from the Andes starts flowing down the Rio de La Plata, Spanish Amazonia becomes a far more important colony as a waystation between Buenos Aires and Madrid, and a good base from which to patrol for piracy. Forts slowly turn into towns, and the region's economy becomes centered on exploration and exploitation of the resources of the Amazon Basin for Madrid.

I'd imagine that due to its late development + how remote it is from other colonies, this colony would have decent odds of not pursuing independence unless it's bankrolled by a third power. But there's also not non-existent odds that this colony plus a good chunk of Eastern Venezuela make up a singular colony centered on the Amazon and Orinoco Rivers while Western Venezuela is considered part of Colombia/New Granada due to differing centers of power.
Last edited: Apr 17, 2020

I'll just suppose the Spanish did settle the mouth of the Amazon, given that the Treaty of Tordesillas had many interpretations and only one gave part of the mouth of the Amazon to the Portuguese (Ribero's as seen in the map). I'd stick with the demarcation of Jaume Ferrer which seems to be the most centric located roughly at 45.5ºW. It would make some sense for the Spanish to conquer the mouth of the Amazon given that Francisco de Orellana had already explored most of the river and stablished a temporal settlement at Marajo Island. Let's assume the Crown sends some colonists, explorers or whatever to settle the area. The territory is poor in mineral resources (sure, the Amazon is filled with them, but good luck finding them in the XVI century). There would be some trade up and down the Amazon, maybe some gold miners could send their discoveries down the Amazon to avoid inspection at Lima and then taking the common route through Panama. Being relatively distant from the Spanish Main and other colonies it could end up becoming some sort of an outlaw, and that distance would complicate things regarding it's defence against the English, French or Dutch. IOTL the French attempted to settle the area in 1610 but they were kicked out by the then-Habsburg-ruled Portugal. With the Spanish presence being weaker than the Portuguese due to a matter of how already huge the Castilian part was, I can see the French managing to stabilise the colony. Some colonial conflict could emerge and the Amazon is likely to switch hand multiple times, but I just can't see a permanent Spanish control of the mouth of the river past the 1640's. That would surely result into more Spanish settlement of the upper course of the river, so at least the borders of ATL Peru or Colombia would be pushed eastwards.

And how about, Spanish northern side of Amazon, Portuguese southern side? Some sort of compromise...

What about the Spanish controlling the Amazon Basin, just to make Peru, Argentina more easily connected to Granada?

Maybe if Bartolomeu Dias got to Hispaniola first, no Columbus? The Portuguese get titular charge of the whole new world by treaty, but lots of unofficial Spanish settlers bigfoot along. Cortez, comfortable with semi-legal situations, lives in Cuba for a while, sneaks over to conquer Mexico, Spain sends a serious force to get more loot and by extension the whole mainland, but the Portuguese hang on to fortified ports and there's so much loot from the mainland the Spanish give them all of the Caribbean islands to prevent piracy. No Portuguese settlement on mainland South America at all. Meanwhile Spain and Portugal have teamed up and formed a joint Spice Company because the Spice Must Flow from Asia. Over the next two centuries Portugal gets rich as the bankers, madeira provisioners, and chandlers to the huge but increasingly impoverished Spanish Empire. No Portugal-English friendship; on the contrary they fight like cats in a sack over who gets to rip off the Spanish: British pirates or Portuguese bankers?