Banned
1972 was a massive election for Republicans. They carried every state in the presidential election except for Massachusetts and the District of Columbia. From Washington to Maine, and Florida to California, nearly every state voted for Richard Nixon. Yet even during this time, Democrats still beat Republican Incumbents. In Colorado’s 1st District, Pat Schroeder defeated Mike McKevitt. She was the only woman to flip a seat that cycle. Her credentials with labor and education groups and stances on the environment and childcare were what got her elected, and were what kept her in office. Through the Reagan years, she kept her seat, despite Reagan carrying Colorado in both 1980 and 1984. She voted against the Reagan tax cuts, because she thought that the country could not afford the cuts. But she also voted against the 1986 tax-reform bill, as she favored more progressive rates. Pat Schroeder was known in her early tenure for balancing her congressional work with motherhood, even bringing diapers to the floor of Congress.

By this point, Ronald Reagan was now well into his second term, bringing the question of who would replace him come 1988? In mid-1987, there were 8 major candidates on the Democratic side: Jesse Jackson, a civil rights leader from South Carolina; Michael Dukakis, governor of Massachusetts; Al Gore, senator from Tennessee; Gary Hart, senator from Colorado; Paul Simon, senator from Illinois; Dick Gephardt, representative from Missouri; Bruce Babbitt, governor of Arizona; and Joe Biden, senator from Delaware. While there was no clear front runner, Jackson and Dukakis led in the polls during the summer months. Pat Schroeder initially chaired Gary Hart’s campaign before he ended his run in May. Though she did not initially seek to run, several members and former members of congress, most notably Patsy Mink, Shirley Chisholm, Barbara Mikulski, and Geraldine Ferraro, encouraged her to run, seeing the real possibility for her to become the nominee.

Transcript of an Event Speech given by Representative Schroeder at 5:30 PM, Friday, June 5th, 1987
REP. SCHROEDER: Good Morning Denver!
CROWD: [loud cheering and applause are heard]
REP. SCHROEDER: Thank you all for being here, you are so wonderful to join us here in Denver which is home, with my wonderful family. I wanna thank the police force, we really wanted to ride in on their horse, but they thought that might be tacky-
CROWD: [scattered laughter]
REP. SCHROEDER: They couldn’t have been nicer. What a great Denver day, couldn’t have a nicer one. I thank you wonderful people who are standing here, for you are the core of the most incredible and fantastic band of people I have ever seen. You are the people ready to take America back.
CROWD: [cheering and applause]
REP. SCHROEDER: You know, I see many of you out there that started with us back in 1972. In 1972 when we started this grassroots campaign in Denver, with a mother and young children, [turns around] my gosh look at the size she’s gotten to be now, she’s quite large, but young children going out and saying “Wait a minute, there can be a different kind of politics!” Judy Collins was our songster and we pulled off a terrific upset in ‘72, and it’s good to see you still hanging in.
CROWD: [cheering and applause]
REP. SCHROEDER: Earlier this week, I set out to see if it was too late to start a campaign. Not a symbolic campaign, but a winning campaign for the presidency of the United States.
CROWD: [cheering and applause]
REP. SCHROEDER: I said that I could not stand aside from a campaign that would decide my nation’s future and my children’s future, that it was important to get out and have a voice. Political pundits around the country were totally horrified by my plain speaking, when I walked out and said “No dough, no go.” They couldn’t believe that anyone could be that straight-speaking, but that’s what we are in Colorado. But that’s not what there is in Washington, where carefully walking around the question is the normal. That’s not what I want in my congressmen and congresswomen or in my president, and I know that none of you like that either. It is for that reason that I am officially announcing my candidacy for the Democratic Nomination for President of the United States.
CROWD: [very loud cheering and applause]
REP. SCHROEDER: I want America to see me as a candidate for president who was a woman, rather than a woman’s candidate and label me and pidgeon-hole me, because my qualifications are every bit as good as a man’s. I want to talk to people in as many cities and states as possible. Whether you live in the skyscrapers of New York and Chicago or on family farms in Montana or Alabama, I want to talk with as many people as I can. A president should listen to the interests of the American people, and you can’t do that without being there with the American People.

Her entrance into the race made her the last candidate to join the primary, barring Gary Hart’s re-entrance into the race in December. One of the most common traits of her campaign was achieving equality. This was most evident in her tax reform plan. The plan would place a tax rate of 3% on annual income past $250,000. The money from this would be used to decrease the wage gap between men and women, as well as reinvest in neglected parts of America, including midwestern cities that had suffered from deindustrialization. This money would also be used to improve the American education system, because, as Schroeder put it, “We can invest in the current workforce and ensure a bright today, but we can not have a bright future without investing in the next generation.” Another part of her platform was introducing a paid parental or medical leave, which would require that companies allow for 12 weeks annually of paid leave if an employee be medically ill, if an employee needs to care for someone who is medically ill, or if an employee has a newborn child to attend to. Her focus on equality combined with her experience distinguished her from other candidates.
On top of this distinction, 1980 and 1984 both had women making up more of the vote than men. Initially, DNC officials had wanted Mario Cuomo to run in an attempt to attract the woman vote, however he declined. They then shifted to Gary Hart, but he dropped out in May. Pat Schroeder made the argument that she was uniquely suited to draw women out to vote. When asked by one reporter if she thought she was electable, she responded “Yes I do think I am electable, if I wasn’t I wouldn’t have flipped a Republican district in 1972, you know when Republicans won every state in the presidential election except for Massachusetts.” Though on paper she seemed to be a good candidate, she was only receiving around 3% in national polls in June. This would change very soon.

The debate was attended by Massachusetts Governor Michael Dukakis; Reverend Jesse Jackson; Senator from Tennessee, Al Gore; Senator from Illinois Paul Simon; former Governor of Arizona, Bruce Babbitt; Representative from Missouri’s 3rd district, Paul Gephardt; Senator from Delaware, Joe Biden; and Representative from Colorado’s 1st district, Pat Schroeder. The debate was moderated by Ken Bode of NBC.
REP. SCHROEDER: Good evening Portland. Before I begin I’d like to go over some facts. 53% of the voting population in 1984 was female, 10% was black, and 3% was Hispanic. A large part of our voters are in these groups. So if they have trouble taking advice on equality from a panel of 6 white men, 1 black man, and 1 white woman, their trouble is justified. But know that any candidate on this stage would stand for equality. But I have experienced inequality myself. Of any candidate on this stage, I have been asked the most about my electability. Not because I’m unelectable, no, I flipped a republican seat blue in 1972, the second biggest election for Republicans. But rather, because I am a woman. As I said, any one of these candidates will stand up for equality, but I have experienced it myself.

The Equality Debate was the first turning point in Pat Schroeder’s campaign. It was the debate that put her on the map as a candidate. Prior to the debate, she only received 3% in polls. After it, she jumped to 10%. Most of her support came from Undecided voters, and from Representative Gephardt, who took a beating in the debate.

After the debate, a reporter asked President Ronald Reagan “Do you think a woman could be elected president within your lifetime?” To which Reagan responded “Well it would depend on who it was, but if you’re talking about Representative Pat Schoeder, I’m going to be honest, she has a shot.” This was later walked back by Ronald Reagan. “Not saying she would win against the republican nominee, but she has a chance.” After the statement, more Americans thought that a woman could be elected president (Yes/No, 50-49) compared to just a few months ago (Yes/No, 41-58)

Schroeder’s prospects glistened even more as August rolled around, when both Joe Biden and Paul Gephardt ended their campaigns. Neither made any endorsements until much later in the primary. Despite her early successes, Iowa was still 5 months away, and there were many hurdles yet to be overcome.

IcyCaspian said:
After the statement, more Americans thought that a woman could be elected president (Yes/No, 50-49) compared to just a few months ago (Yes/No, 41-58)
Click to expand...

Good choice for an underused awesome person, but voters were rather more approving than you state—although electing an actual woman versus a hypothetical is of course different. 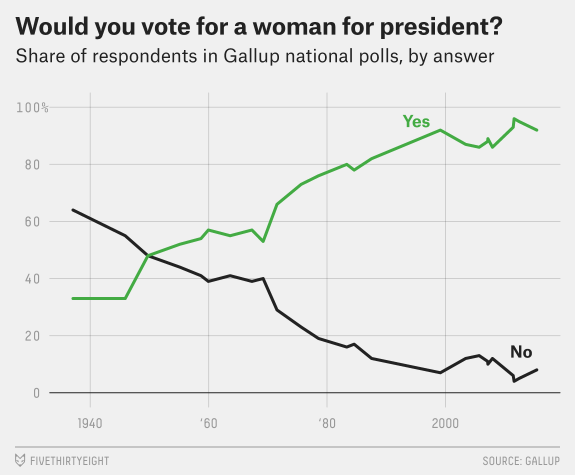 Electric Monk said:
Good choice for an underused awesome person, but voters were rather more approving than you state—although electing an actual woman versus a hypothetical is of course different.

Thanks! This is my first timeline that I'm putting into writing so I'm excited too.

Totally fair. Taking a quick look, there’s a 1996 poll—40 “Is America Ready For A Woman President?” with 53 against—so the numbers could actually be worse back then lol.
Threadmarks
Reader mode
You must log in or register to reply here.
Top
Share:
Share
Top