Perch? What Perch? - An Alternate History of Modern Football (1990 - present) Des Lynam: Good evening, and welcome to Match of the Day on one of the most eagerly anticipated dates in the footballing calendar - the day of the FA Cup 3rd Round. We have highlights from three key games in the FA Cup today, and there have been some surprises, some highs and some lows. Our first game of the evening comes from the City Ground, where Brian Clough looks to start his campaign to capture a trophy which has eluded him throughout his managerial career for Nottingham Forest. Their opponents? Manchester United, whose manager, Alex Ferguson, has been under immense scrutiny lately. Could this be the year where he breaks his trophy hoo-doo at Old Trafford? John Motson is at the City Ground.

Mark Robins was a youngster who Manchester United had pinned their hopes on. Having risen as part of the late 80s group of young players at Old Trafford known in the media as Fergie's Fledglings alongside the likes of Russell Beardsmore, he had recently made his breakthrough in the Manchester United first team.

He'd scored his first United goal in a 2-2 draw against Wimbledon the previous week, and was confident of getting another. However, in this game, he seemed to be snatching at chances, and as such, he kept missing them. One such chance came early in the second half.

Promising full-back Lee Martin intercepted a pass from a Forest midfielder, knocking an outstanding pass to United veteran Mark Hughes, who delivered a pinpoint cross in the box to his namesake Robins. Could this be a decisive moment for the youngster? Could he put his name on the back pages tomorrow morning?

The ball came across, as Robins dived for the header.... But he narrowly missed a connection with the ball, as chasing Forest defender Stuart Pearce collected the ball and cleared it.

Later in the broadcast....

John Motson: This has been a very dull game as we approach the last ten minutes, neither side looks set to put their mark on the game. Manchester United look completely out of ideas as Neil Webb loses the ball to Des Walker on the halfway line, who passes it to Steve Hodge. The midfielder runs with the ball, knocking it across to Ian Woan, who is just outside the box. He knocks it on to Nigel Jemson....WHO DELIVERS A RIGHT-FOOTED SHOT INTO THE TOP CORNER.! Fantastic goal by Nottingham Forest, 1-0. 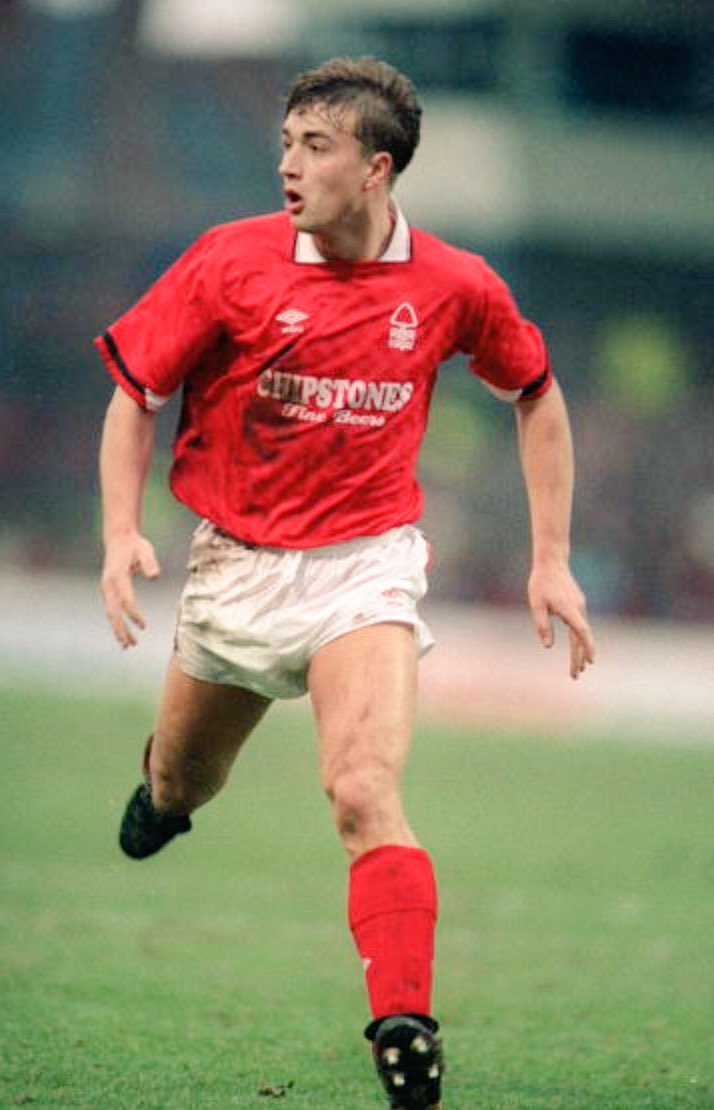 Some time later in a backroom in the City Ground.... 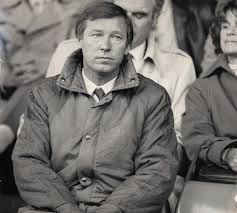 Alex Ferguson surveyed the contents of a whiskey bottle on the desk. He pondered about the game he had just seen. Nottingham Forest 1, Manchester United NIL. The harsh words of away fans rang true. "Time to go, Alex, time to go." He had been at Manchester United and had little to show for it. His young guns had been crucified today, his expensive signings had flopped and he had yet to win a trophy. It's at times like this that a man sometimes has to walk away.

A New Timeline taking a Comprehensive Look at a very different time for British Football....

Banned
Football TL? JUST HOOK IT TO MY VEINS

I once tried to develop a TL with the same POD, but I dropped the idea. It's great to see someone having had this idea too, because it's a POD with incredible consequences for English and European football!
Week One - Post-Fergie Blues

In a statement released by Manchester United, Ferguson said: "It is with great sadness and personal regret that I have chosen to step down as Manchester United manager, following discussions with Martin Edwards, the chairman, and with members of the coaching staff. It was a pleasure to manage such a historic club and to be a part of its history. Although I would have liked to have been the one to bring success to Old Trafford, this was not the case, however, the framework is in place for my eventual successor to deliver the league title that has eluded the club for the past two decades. I wish everyone involved with Manchester United Football Club the best of luck."

Ferguson was appointed as United manager amidst much hype, following his exploits with Aberdeen, both in Scotland and in Europe. However, he has not been able to replicate that success at Manchester United, with the club not having won a trophy throughout his tenure, leaving them having spent 23 years without a league championship.

Speculation is rife as to who will succeed Ferguson. Sources close to the chairman, Martin Edwards say that his preferred option would be an established English manager such as Howard Kendall, recently appointed at local rivals Manchester City or Graham Taylor, who has led successful sides at both Watford and Aston Villa.

However, other members of the Manchester United board feel that it would be in the club's interests to appoint a former player as manager. Former United full-back, and current Arsenal assistant Stewart Houston is believed to have declared his interest, as has Joe Jordan, currently manager of high-flying Third Division side Bristol City. However, the preferred option of this crop would be Steve Coppell, currently manager of First Division side Crystal Palace, although it is believed that Coppell would be unwilling to leave Palace without the promise of significant funds, which may be unlikely considering the money spent by Ferguson in previous seasons.

Youth team manager Eric Harrison will take charge of Manchester United on an interim basis until a formal appointment is made.

In the office of Manchester United chairman, Martin Edwards...

A knock rings out on the door.

"Eric, I was expecting you sooner or later. How are you finding things so far?"

"Not too bad, I suppose, there's a bit of a strange feeling around the first team squad-"

"Yeah, of course, there's bound to be. What were you coming to see me for?"

"Well, I was wondering when a managerial appointment would be made."

Edwards sighed. He'd been trying to avoid this conversation for some time. Of course, they'd held talks with prospective new managers, but they couldn't declare anything beyond that. He twiddled his thumbs before giving Harrison an honest response.

"Well, as things stand, we won't be making a formal appointment until the end of the season. The two targets we have in mind are from outside the club, and they're both attached to clubs."

"I was getting onto that. We've been informed that the FA won't be renewing Bobby Robson's contract as England manager, and although he's been in talks with clubs overseas, we're confident that he'd abandon those plans to come to Old Trafford. The other one is more tentative, as we know England have been talking to him about replacing Bobby. Terry Venables."

"And what does this mean for my young lads? We've got a good group of schoolboys together there. We could be missing out on the next generation of stars if I'm not there to monitor their development-"

"Well, we thought we'd keep the continuity going while you're otherwise occupied. Brian Kidd is going to fill in as youth team manager for the foreseeable future, and we've brought Arnold Muhren back to United to assist him. They're both solid young coaches and they understand the club and its traditions well enough."

Harrison pondered. Yes, Kidd and Muhren were both talented youth coaches, and they understood the club, but he considered both to be soft touches. Brian Kidd was the notable "nice one" in the youth team dressing room: he probably didn't have the authority to lead them, and Muhren was new to coaching and would likely use Kidd as a blueprint.

"Anything else you wanted to discuss, Eric?"

"That'll be all then. And please, call me Martin." Edwards managed a smirk as Harrison left the room, pacified that he'd at least placated one potential backroom malcontent.

*****
​
* Fixtures are the same with the exceptions of a few results:
(A) Crystal Palace vs Coventry City which was initially a 1-0 win for Coventry, ends up as 2-0 due to pressure of Steve Coppell being publicly linked with the job at his old club.
(B) Derby County vs Manchester United was initially a 1-0 loss. I'd factor that the loss of a manager as crucial as Alex Ferguson would have some short term effect, especially considering that interim boss Eric Harrison only had prior coaching experience with youth players and not experienced pros like those in the United set up.
(C) Wimbledon actually only beat Arsenal 1-0 on this weekend. I'd wager that leaks regarding Stewart Houston's potential interest in the Manchester United job would result in possibly fraught tensions in the Arsenal dressing room, providing a tense backdrop to the game.

The next update will be posted on Monday night, and will contain updates regarding those currently linked to the Manchester United job, along with arrivals and departures at First Division clubs in January 1990.

Watching with great interest...will Fergie return to Scotland? If I remember right that he was a favourite for the Hearts job and if he does so, this'll have butterflies in Scottish football no less.

QTXAdsy said:
Watching with great interest...will Fergie return to Scotland? If I remember right that he was a favourite for the Hearts job and if he does so, this'll have butterflies in Scottish football no less.
Click to expand...

All will be revealed. I daresay Fergie won't be out of work for too long, although the situation at Hearts might not turn out in exactly the same way ITT.
Threadmarks
Reader mode
You must log in or register to reply here.
Top
Share:
Share
Top