Charles Manuel said:
And so the bloodletting spreads further.... excellent chapter, as always.

At the very least, the Native American confederations should, if this works as intended and spreads among the rest of them, be better able to hold off European rapaciousness a very good while longer. Now, if they can manage to get on producing their own firearms in some number... the First Peoples might well endure.

I fear for all non-Puritans in the Virginia and Bahamas, if this burning is what awaits them. I hope the Scots run out of steam soon, for they cannot possibly have the numbers sufficient to enforce such onerous terms in the New World without weakening themselves to Royalist influence back home.

Where these proto-vaccines are concerned, I'm very excited to see wether the Pox shall be conquered more than a hundred years early! Imagine all those who died because of it, and the possibilities this offers for the applied chemical and medical sciences! The possibilities are endless.

The Bahamas have been sold to the Portuguese, to enable and fund the Medeteranian expedition, so they won't be facing Scottish rule just a period of plunder. Virginia is under English rule now the Scottish have left, though they must enforce Presbytarianism as a State Religion. OTL, after Swizerland Scotland burned the most witches per capita and it is in this period that such activities were at their most intense. Just like Sweden, Scotland is being devastated by global cooling and has responded with militarism driven by fanatical religion.

Kinda like Sweden, The Scottish Covanenters had eyes bigger than their stomachs, making the enforcement of Presbytarianism on all England the condition of their OTL Alliance with Parliament, thinking that the Parliamentarians wouldn't turn on them once the Royalists were dealt with (which of course they did). TTL, Sweden negotiated Scotland abandoning this alliance (given London had fallen) with domination over Ireland what King Charles of England gave the Scots as their price. That is, if they can take it, which he hopes they can't. He hopes he can consolidate England then go for Scotland while the Scottish are bogged down in Ireland. Sweden very much wants Scottish success here as the Scots are their only reliable ally (part of why they are so happy to destabilise England and humiliate Charles).

Massacheussets and Ireland are not a happy places to be, thats for damn sure. Especially if you are a woman.

Smallpox innoculation was truly practiced in parts of the Ottoman Empire, long before this TL starts. OTL It became common practice in Constantinople about half a century later than where we are now but it is certainly something that would have been talked about in Constantinople at this time


Charles Manuel said:
Another question though is how long can they sustain paying for all this? Victories in the field and sheer momentum help, obviously, but I don't know for how much longer the French and / or the Dutch will be willing to subsidize what is effectively a Swedish empire building project in the Americas by extension of the German War with the British Isles made into a Scandinavian vassal.
Click to expand...

In the case of France, precisely as long as Sweden can threaten to make a separate peace with the Emperor. It should also be pointed out that Sweden now has access to The Sound Dues - significant revenue not theirs OTL, against which they can borrow.

The British Isles isn't going to be a Scandinavian vassal. OTL Scotland and Sweden were closely allied with 1 in 10 Scottish adult males fighting for Sweden in the 30 years war. England is currently paralysed by civil war but she won't be forever and there is no way France or The Dutch would let the British Isles be a scandinavian vassal even if the Swedes had the resources to achieve this (which they don't).

If the Scots succeed in Ireland before Charles succeeds in England, Scotland will continue to have close relations with Sweden and be in a much stronger position in the union than historically. However, this is very far from vassalage.
Last edited: Nov 8, 2021

The Swedes are leaning on everyone in Europe really hard right now. It's hard to imagine most of the continent not being hostile to them after the conclusion of the German War. So long as they keep the crowns of Sweden, Denmark and Norway united they should have a small land border to protect and a first rate navy. But the expenses of maintaining all these new projects seem likely to exceed their incomes until the New World becomes more profitable and Scandinavia recovers from the Little Ice Age.

Daylight Savings said:
The Swedes are leaning on everyone in Europe really hard right now. It's hard to imagine most of the continent not being hostile to them after the conclusion of the German War. So long as they keep the crowns of Sweden, Denmark and Norway united they should have a small land border to protect and a first rate navy. But the expenses of maintaining all these new projects seem likely to exceed their incomes until the New World becomes more profitable and Scandinavia recovers from the Little Ice Age.
Click to expand...

You aren't wrong. This was their MO historically and they did end up fighting a coalition of just about everyone soon after the 30 years war. I am trying to keep everyone in character. 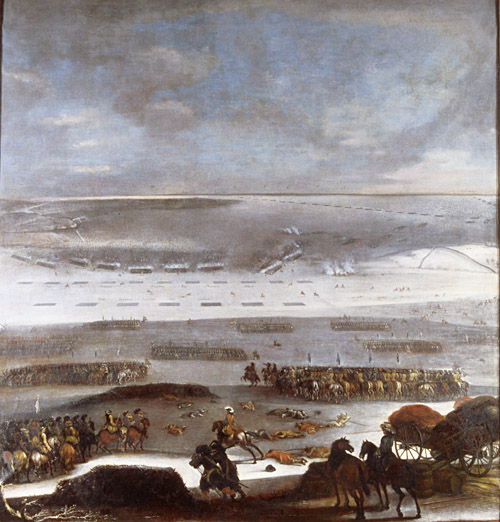 They don't intend to hold anything in the Mediterranean - thats all to be handed over to The Ottomans and fleet withdrawn as soon as practical. That expedition was sent entirely to ensure Ottoman entry into The German War. Also, The Swedes hope for a lasting Ottoman alliance to deter foes and reduce dependence on France.

Christina was known as a notorious spendthrift. She is so keen on the new world precisely because of the little ice age. Historically as the little ice age reduced crop yields Sweden responded to having more mouths than could be fed by sending the excess mouths to war where they would eat from plunder. Christina would like another option.
Last edited: Nov 8, 2021

raharris1973 said:
When are you going to instantiate this part of your title?

Sorry for the broken half-promise. Last section was an interlude, not a chapter . So much less complexity showing events in north America than finishing another Europe chapter (which is in the writing).

Next chapter The Ottomans will enter the war and their representatives will arrive at Osnabrück.

Shoutout for resources on The Polish Lithuanian Commonwealth in the 1640's

So I have no shortage of resources on the Polish-Swedish beef. However, they all rely on Swedish primary sources. Like, it seems, most historians with English as a first language, I don't read Polish. And pretty much all I can find is in Polish.

Well, you could attempt to make do with machine translation programs to deal with this issue but the quality of the translation itself might leave much to be desired or be hard to comprehend. Otherwise, you could enlist the aid of some of our polish / polish speaking friends on the forums, a call for aid basically.

Otherwise, you might find yourself relying on the Swedish accounts of the War, or whatever documentation from the Deluge may be found to fill in the gaps. For all that the PLC prospered (relatively, the Sejm and the Magnates were busy pulling a 16th Century Hungary by ensuring a slow death of the State, just not to the Ottomans this time and rumblings of proto-Cossack discontent beggining to crop up in Polish-held Ukraine) we have a seeming paucity of sources outside of Poland itself, unless you can find more.

Maybe search for French-language sources, see if historic ties between Poland and France led to some academic interest as well?
Threadmarks
Reader mode
You must log in or register to reply here.
Top
Share:
Share
Top