Unkown00 said:
I'm not sure if Kazakhstan would really own it. I think it would just be some Ural state.
Click to expand...

I agree. The original map also had California independent (but not Texas), Rio Grande do Sul (neo-Riograndense Republic I guess), Azerbaiyan with Armenia and chunks of Western Iran, a neo-Khanate (or Republic) of Kazan, and Ukraine and Belarus entirely partitioned between Poland, Russia, and Turkey.

Also, didn't you cringe when seeing Asia dominated by China or the African borders? I'm glad you removed sone of the map's wanks.
Last edited: May 6, 2021

Fernan3451 said:
I agree. The original map also had California independent (but not Texas), Rio Grande do Sul (neo-Riograndense Republic I guess), Azerbaiyan with Armenia and chunks of Western Iran, a neo-Khanate (or Republic) of Kazan, and Ukraine and Belarus entirely partitioned between Poland, Russia, and Turkey.

Also, didn't you cringe when seeing Asia dominated by China or the African borders? I'm glad you removed sone of the map's wanks.
Click to expand...

I believe California was stated as an Autonomous zone on the map.

But Yeah I agree with you on the map wanks, it was pretty weird.

Emirate of Egypt - the Great Arab Empire (circa 1910)
​
This map shows the mighty Emirate of Egypt and its vassal states, with their capitals marked with a star, and the rest of important cities marked by a point. 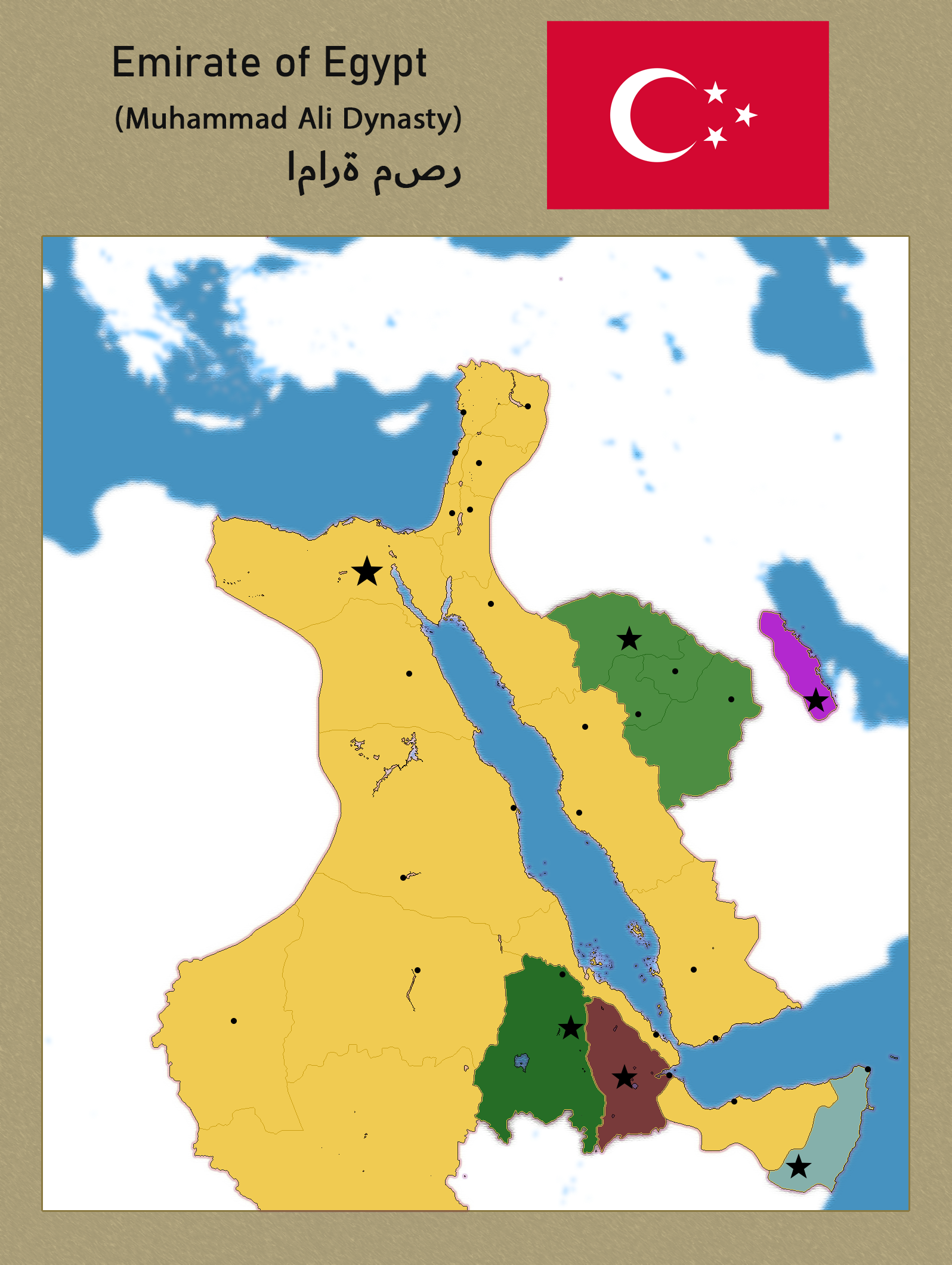 DaniCBP said:
This map shows the mighty Emirate of Egypt and its vassal states,
Click to expand...

Good show! Not sure if this counts as a quibble or not, but the western border north of Darfur strikes me as probably De Facto rather than De Jure: I'd expect by 1910 there would be ongoing arguments as to where Libya ends and Egypt begins.

Tackled an idea I've had for a long time (with my memory being jogged by the TFS timeline). Basically, what if Russia isn't screwed over by all the catastrophes it went through during the 20th century - WW1, the civil war, WW2 etc. Essentially, Russia continues to industrialise, and with a much larger population than OTL, is able to economically challenge the US by the late 1960s. 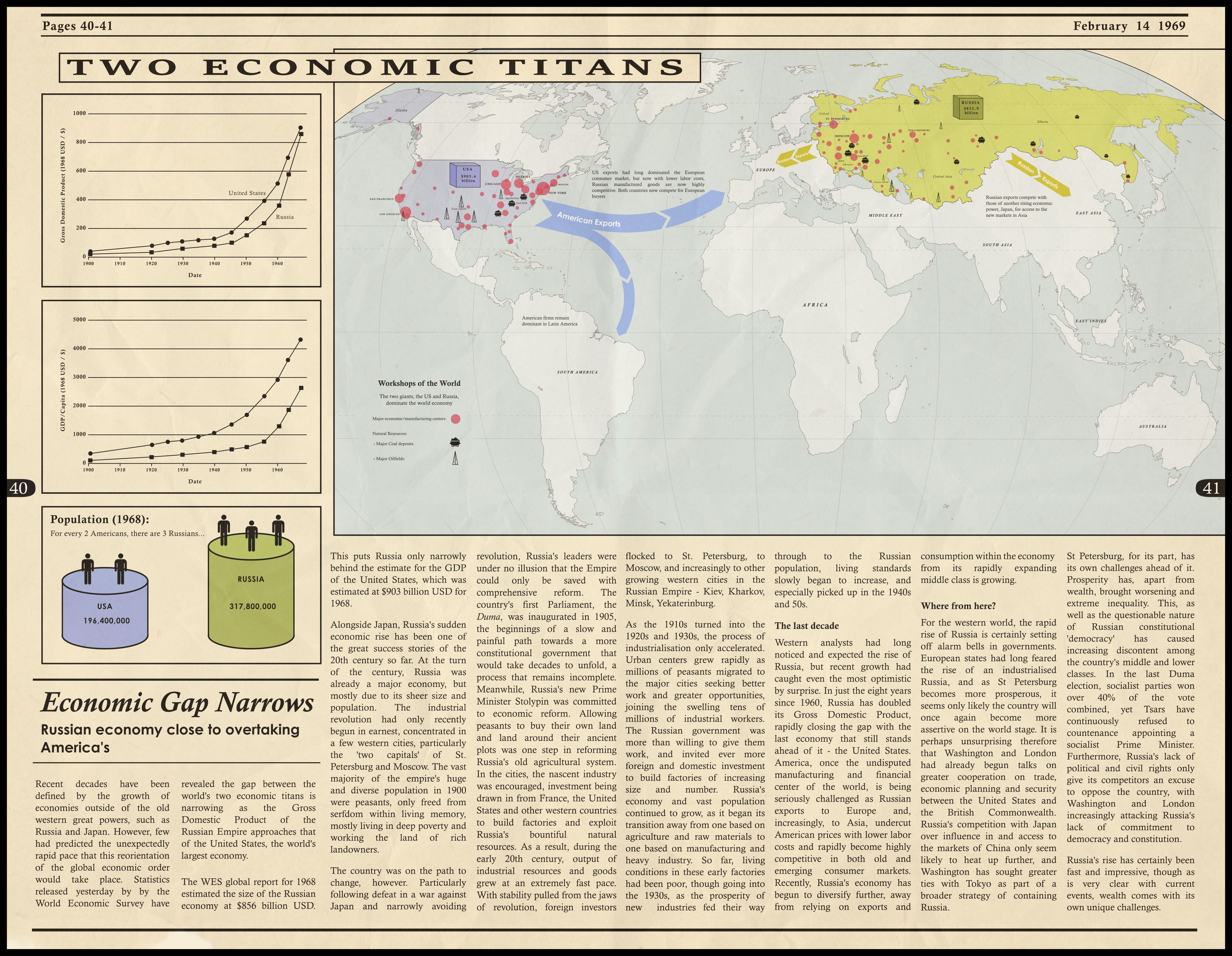 Awesome map! Russia really had a terrible 20th century OTL - there's not really a lot of Russo-wanks around, though.

A couple of questions, if they're fine:

1. Is there a cold war brewing between the two superpowers (besides US and UK chastisement of Russia's lack of democracy in the last paragraphs)? Perhaps there might be no ideological conflict to add to the fire here like capitalism vs communism, but one wonders when one looks at the Russia's quick convergence on the American economy.

2.. How's Europe here? Is it integrated a la the European Union or European Economic Area? And what about their colonial empires? Do they still exist? (besides the British Commonwealth, which I assume is a federal type thingy)


3. Without the Soviet example, did any countries turn socialist or communist? (IMO, I actually think the socialist cause might be stronger at least in the Western world, given less association with famine-prone Stalinist dictatorships, which is obviously butterflied here)

DaniCBP said:
Emirate of Egypt - the Great Arab Empire (circa 1910)
​
This map shows the mighty Emirate of Egypt and its vassal states, with their capitals marked with a star, and the rest of important cities marked by a point.

Nice map. Heads up though, The arabic script you used is placed incorrectly. Arabic is read right to left, however, you placed the letters left to right. It should look like this: امارة مصر

My Grand Project: World! (Working Title)
Here's what I have so far:
A .json file specifically.
Last edited: May 6, 2021

Ive been working on this for about a week or two and wanted to show it to a greater audience . This is the world of Nuala, Land of Green Mist. A fantasy Ireland based on the book of Invasions that will be for a DND campaign.

Donor
And here's a pico worlda... 64 times smaller than normal worlda. I promise I won't do more.

I think you accidentally annexed Vietnam into China.

Also, the Central American states should still be visible at this scale.

Also, the Central American states should still be visible at this scale.
Click to expand...

Yeah Vietnam is a mistake. I may have a look at CA again.

gotta say, not a huge fan of the choice of color for Ethiopia

FancyHat said:
gotta say, not a huge fan of the choice of color for Ethiopia
Click to expand...

Oddly addictive to use.


Gust said:
And here's a pico world
Click to expand...

At this point the deformation of geography is starting to make this an alternate history map of the asb variety all on its own.

An approximation of In the Presence of Mine Enemies by Harry Turtledove.

Basically, the idea was that the Axis wins WW2 and then wins an implicitly nuclear WW3 against the US and friends. I took the liberty of assuming that the Iranians and Indians (mentioned to have been conquered) were incorporated after this war. China is split in two and the larger, Southern government has to permit Japanese troops to enter the costal zone at will. New Zealand has been partitioned. Argentina was rewarded for its large Italian population. Germany has made an extensive economic zone in South America in addition to its tributes from subordinate members of the Greater German Empire (ex. Britain) and occupied countries (ex. Canada). South Africa was mentioned as being independent so I had the Germans give them Nigeria. Spain was rewarded for its cooperation, the Arabian peninsula is under joint Italo-German occupation with Yemen going to the Italians and Oman going to the Germans. I also wonder if maybe in this world the Arab unification projects were a little more successful until they got smashed in WW3.

I know IPoME is not the most realistic work of alternate history as history, but I will say it was (in my humble opinion) a good book as a book about the suffering of the characters forced to live in hiding their whole lives.

Banned
Ban: probably a sockpuppet or something like that 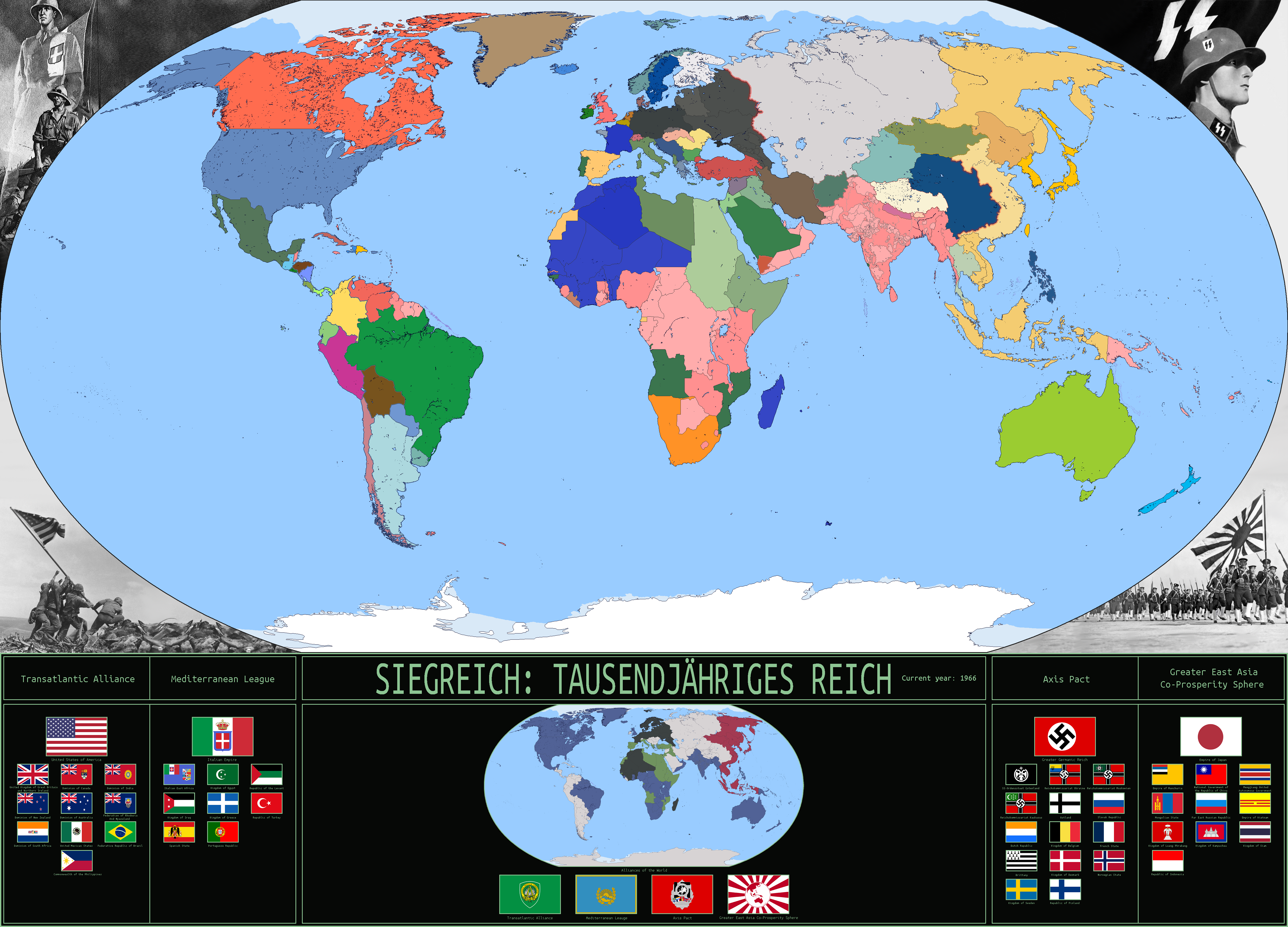 What if the Entente won the Second Great War?


In this alternate world, the United States under Herbert Hoover would continue to get worse and worse as the economy continues to decline. Meanwhile, the confederacy does better, because why not. By the time the Great War began, the US was unprepared, much more than in the series. This allows the Confederacy to push across the nation, capturing Philadelphia and Los Angelis. Meanwhile, in Europe, the Germans are outnumbered on all sides, and Berlin begins superbombed by the British (who developed the weapon first) forced them to surrender. Finally, the US surrender in 1945, with New York being superbomed. With the end of the war, Germany and the US were balkanize. Eventually, a cold war develops between the West (lead by the Confederacy) and the East (Lead by the Russians).
You must log in or register to reply here.
Top
Share:
Share
Top