And here we have the next country in the Layers of Irredentism series: Germany. Well, kind of. Crazy-Boris did most of the work, but there are a lot of bits he missed which I added in.

Christory said:
And here we have the next country in the Layers of Irredentism series: Germany.
Click to expand...

Now that's what we call Großdeutschland.

Banned
Finished maps of the German states throughout the early 20th century (excluding the greater Austro-Hungarian Empire in 1907), for my greater overarching timeline, Boll Weevil Blues. While I don't have time to go into the whole timeline's lore, here's a summary of the relevant German bits: For starters, Otto von Bismarck gets shot at by an assassin a few months before the Austro-Prussian War just like in our world, only in this timeline he actually gets killed. Since Bismarck is dead, cooler heads prevail in the Holstein Crisis and the Prussians back down. Since the Austro-Prussian War doesn't happen, the German Confederation sticks around, and Germany doesn't unify. The Franco-Prussian War is also avoided when Prince Leopold actually manages to take the Spanish throne instead of arriving late. Flash forward to 1907 when the Conflagration (this world's WW1) starts, by which point Britain has allied with Prussia and Austria, bringing the German Confederation onto their side, while France, Italy, the US, and Russia fight against them (the fact that the alliances fell this way may seem a bit strange but just trust me that I thought it through, I don't have time to explain it all). As the war drags on, the Prussian and Austrian militaries basically take de facto control of the countries, much like OTL imperial Germany, and all but the largest states are absorbed by them over time as autonomous subnational monarchies. Finally, as things collapse and the war is lost in 1915, Prussia loses Posen to the Russians, Schleswig to the Danes, and the Saarland and Luxembourg to the French, and the Prussian monarch abdicates and is replaced by a council of aristocrats. Then, in 1921, a nationalist paramilitary overthrows the Prussian aristocracy, who flee to the Rhineland, and the nationalists form the Prussian National State. Meanwhile in 1925, the Habsburgs have to put down a Bavarian revolt, and end up forming a triple monarchy of Swabia, Bavaria, and Austria, since pretty much all the other Habsburg realms were lost after WW1 much like IOTL. Throughout the 1920s, the Rhenish form an aristocratic oligarchy, the Hessians and Hanoverians form constitutional monarchies, Carniola becomes an Italian vassal, Hohenzollern (the province) becomes an independent microstate/tax haven, the Saarland becomes a democratic French vassal, Liechtenstein still exists as usual, Bohemia and Moravia are Austrian vassals (Czech nationalism is kind of nipped in the bud in the 19th century with some reforms and an aristocracy-fueled "Moravianism" as an ideology), and the Prussians do some saber-rattling, abolish the subnational monarchies, and become a general international pariah. Until, in 1932, the British stumble their way into a brief naval war with the French and Americans (which they quickly lose (yes I'm aware that the British losing a naval war at that time seems strange, once again I don't have time to explain, but trust me that I've thought it through)) and the Prussians see the opportunity to take back the Rhineland, and march there through Hesse. In response, French, Austrian, Rhenish, and Hessian forces completely annihalate them in battle, take Berlin, and topple the nationalists. Austria takes Thuringia as a fourth constituent monarchy, Saxony is restored under their old king, and a Prussian Republic is formed, but the old Rhenish aristocracy in the shadows hold real control. Finally, in 1940, a massive wave of pro-democracy protests throughout Germany force the various states to implement electoral reform and become real democracies, and Germany once again slowly opens up to the world and eventually retakes its spot as the economic heart of Europe.

I really liked this. I always toyed with alternate German history ideas. This is quite original concept. Also until the end, I waited for happy ending for Germany but this ending better and avoids "Germany always unifies" cliche. 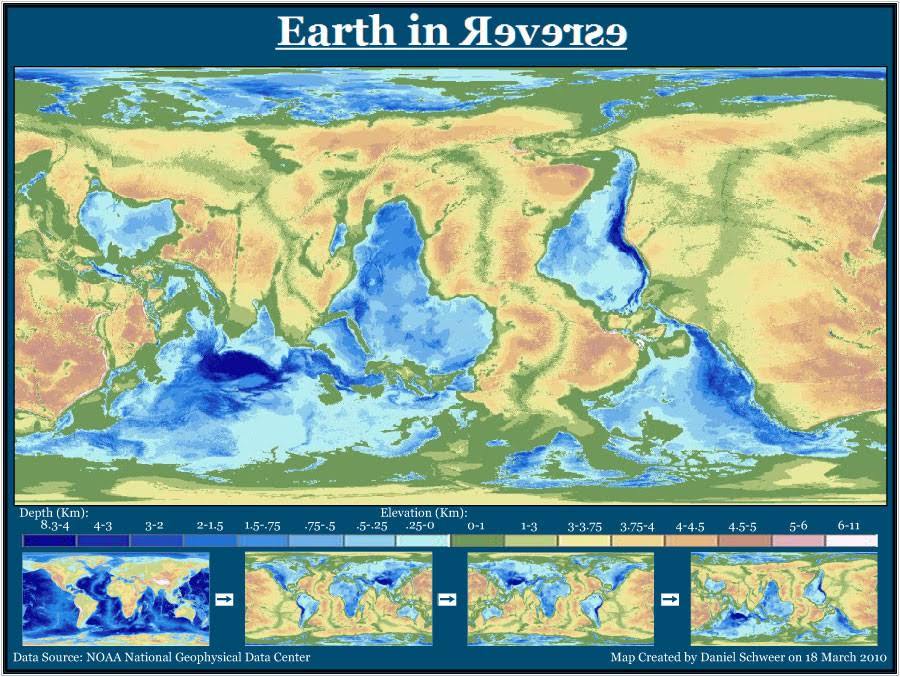 The Name is a bit stupid, but the idea is this:
ww2 but axis win how creative i know i know
But Germany does not specify any States in Central Asia leading a lots of chaos. 1955 is actually a low of states before Kastar. Kastar gains the land with conquest and unions.

Uh Sir, Where is the Sea?
A very stupid scenario, very unrealistic. Just stop.
1 Week after:

10 Years Later: The Fall of Europe:

The Fall is late because Europe was hopeful people could be rescued from the salty and hot deserts.

Shouldn’t there have been an immediate inflow from the Black Sea? And even a little from the Straight of Gibraltar (I know that the Mediterranean loses water through the Straight; but if ALL the water is gone, it would take a wall of soil to sea level stop it from flowing back in at least a little. I mention this because you have a nice little lake at the Nile’s outflow, but not from either of those locations.

Also, uh… what happened to every other coastline on Earth?

BrobDingnag said:
Shouldn’t there have been an immediate inflow from the Black Sea? And even a little from the Straight of Gibraltar (I know that the Mediterranean loses water through the Straight; but if ALL the water is gone, it would take a wall of soil to sea level stop it from flowing back in at least a little. I mention this because you have a nice little lake at the Nile’s outflow, but not from either of those locations.

Also, uh… what happened to every other coastline on Earth?
Click to expand...

it is given equally to the rest of the world. I couldnt find a more moderate rise map that wasnt blank. 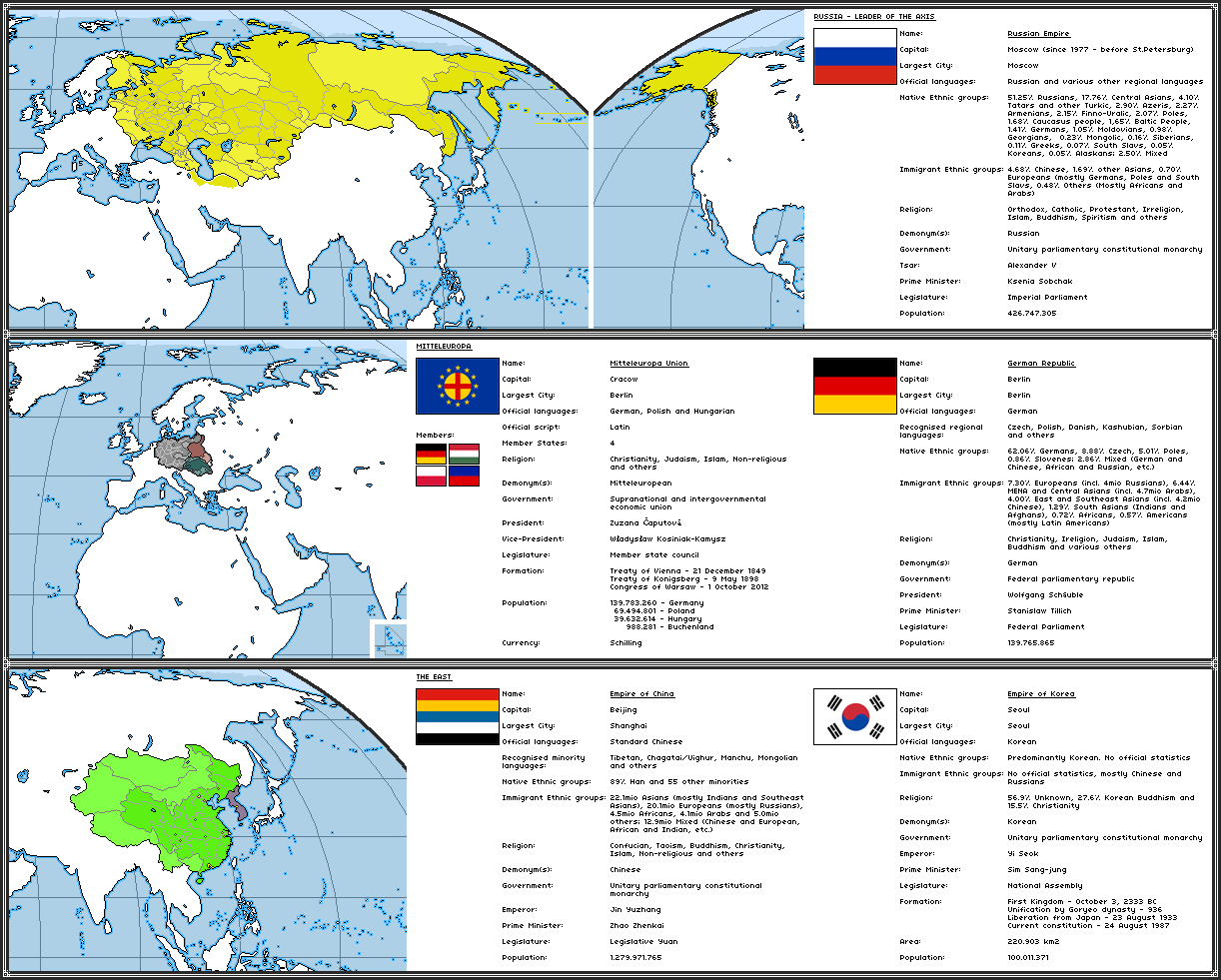 Continuing with my Mapseries 3 - A short summary of the Axis and all its members. The largest political, economic and security alliance on the planet. Their main rival is the Federation of Worker Republics.

I just started working with a Before 1900 timeline (mostly ASB). As I don't know where/how to start nor the tematics (open to suggestions), I decided to begin with a map: 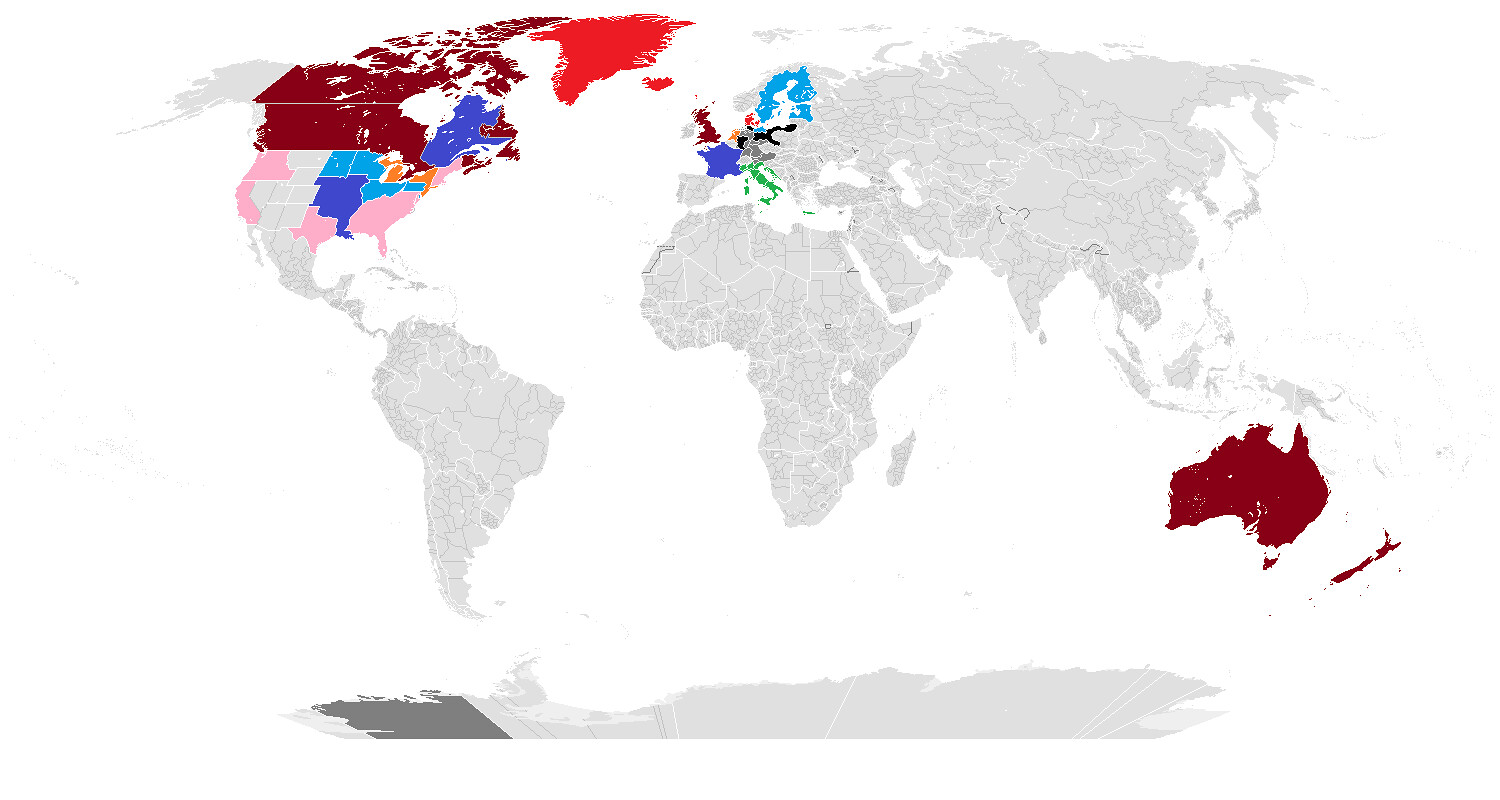 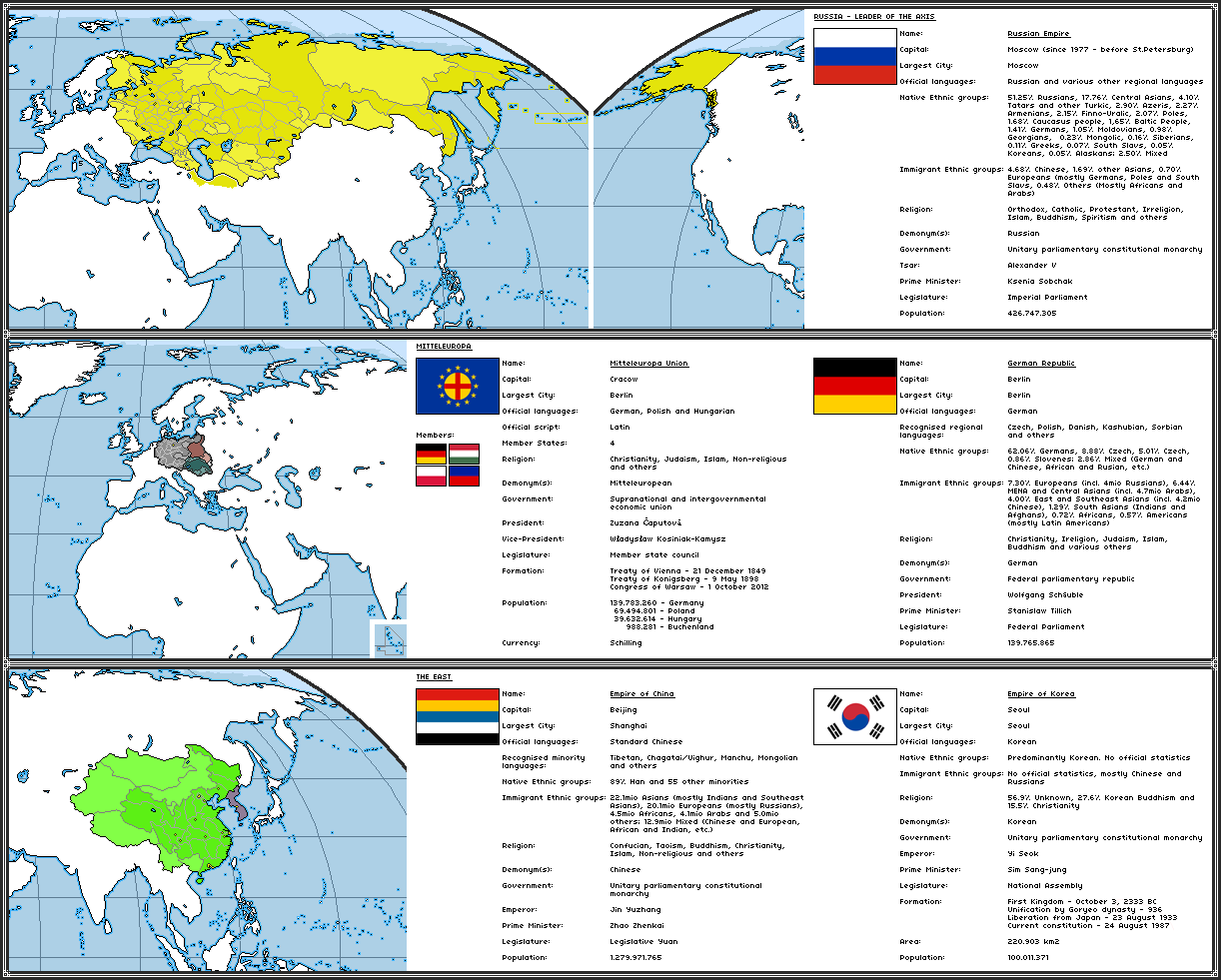 ​
Love the map--I'm a big fan of detailed worldAs, they remind me a lot of pixel art. Which brings me to my question: do you have the basemap you used for this, the one with the latitude/longitude lines and blue outlines on landmasses? It would be much appreciated.

Looking forward to the next update to this!

tungsterismapping said:
Uh Sir, Where is the Sea?
Click to expand...

What happened to Germany?

This is the map I have spent the longest working on by far... Hope you all enjoy! I took inspiration from many great cartographers on the forum as I tried to make my own style. I'm rather happy with the result.

From the Union of American Realms:


The U.A.R. Census Region of the Upper Atlantic 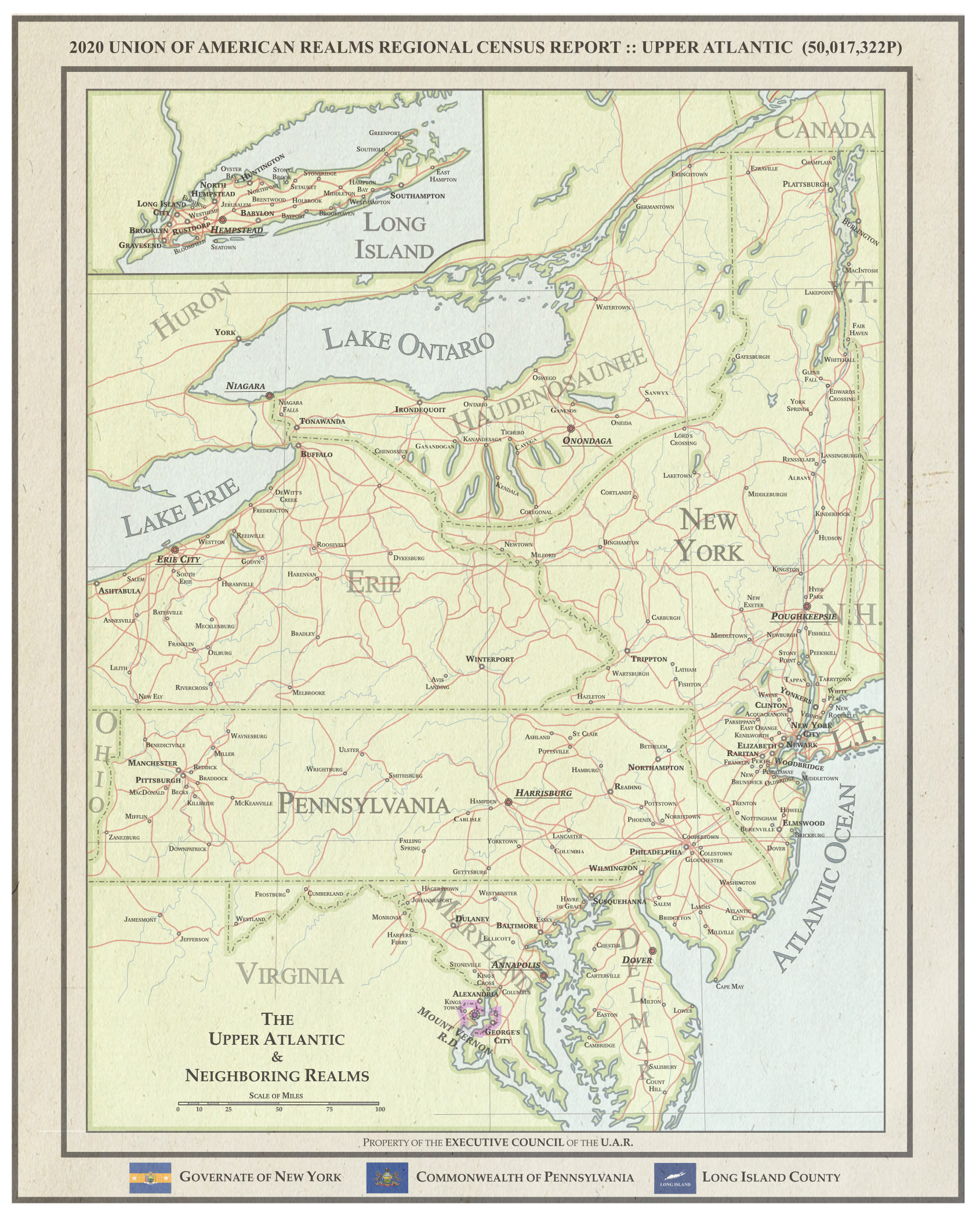 ​
For official confederal purposes, the Upper Atlantic Census Regions consists of the realms of New York, Pennsylvania and Long Island. The map shows those three realms in details, along with the immediate neighbors (Maryland, Delmar, Erie, Haudenosaunee); while the farther neighbors are shown in the least detail (Virginia, New Haven, Vermont, Huron, Canada and Ohio). You can also see the Royal Domain, officially the territory of the House of Columbia, with the seat of the Monarch-President located at Mount Vernon, and the Confederal Assembly, Supreme Court of the Union and the Executive Council located in George's City, within the Royal Domain but across the water from Mount Vernon. The realms are grouped in different ways by different organizations, but the Union Census Bureau officially recognizes the Upper Atlantic Census Region of consisting of NY, PA & LI.
Last edited: Dec 12, 2019

Selvetrica said:
What happened to Germany?
Click to expand...

Christory said:
And here we have the next country in the Layers of Irredentism series: Germany. Well, kind of. Crazy-Boris did most of the work, but there are a lot of bits he missed which I added in.

Map of the Americas from my TL “Storming the High Castle”