Hello all, this is my alternate geography/history world, with the basic idea being that the US states are in a confederation with each other, and each one is roughly country sized. I have made a few posts in the map thread and on Reddit, however they mostly focus on one state (or one set of similar states). I'll be posting what I have so far for continents (for certain regions, such as Africa, I do the post WW1 map/colonial map, before doing the modern day map). This is done in the VT-BAM, which is a really nice projection type/size (its a large equirectangular).

keep in mind that certain things such as leaders and anything similar are only for making it nice looking, and doesn't affect the lore

NA at the moment: 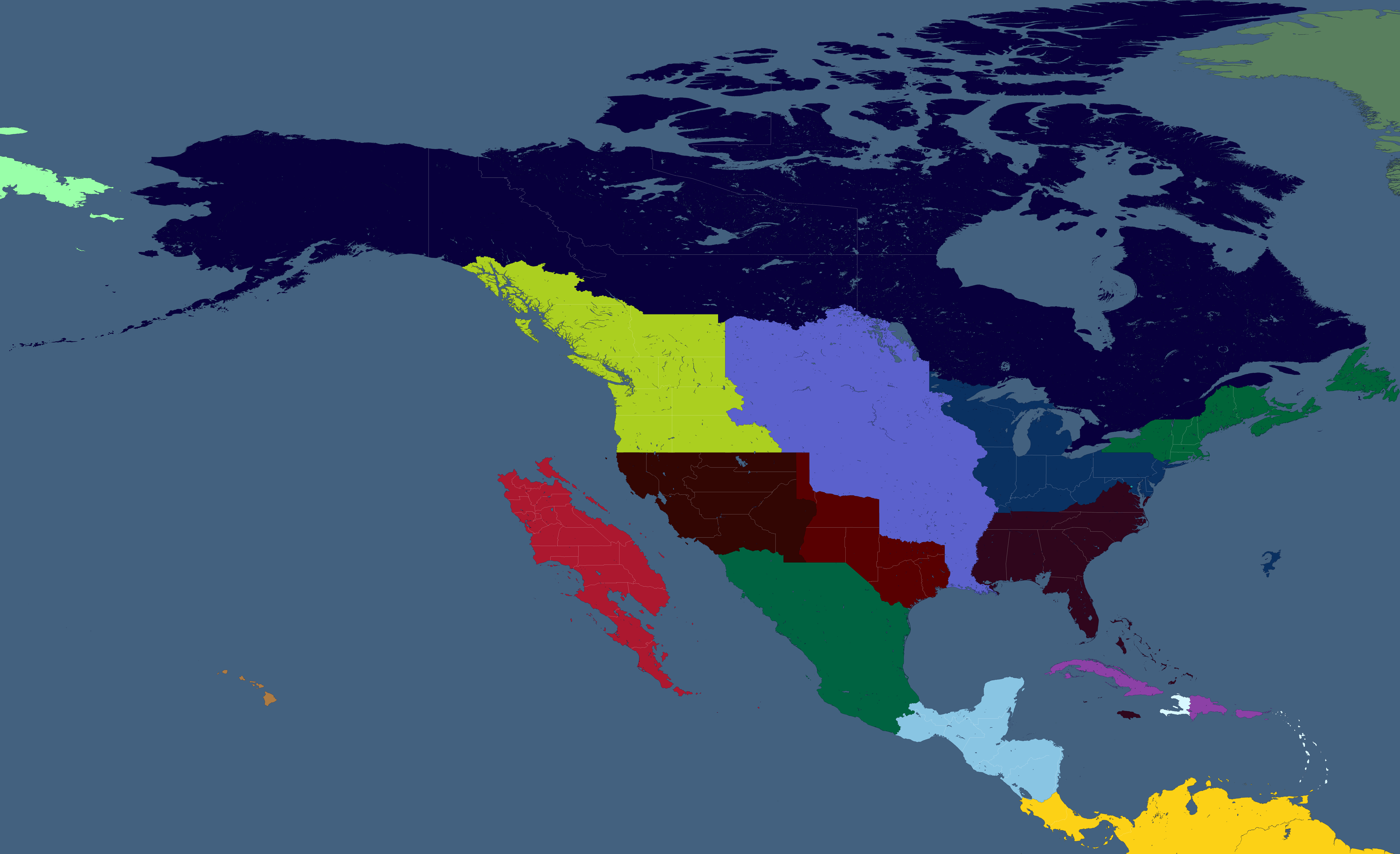 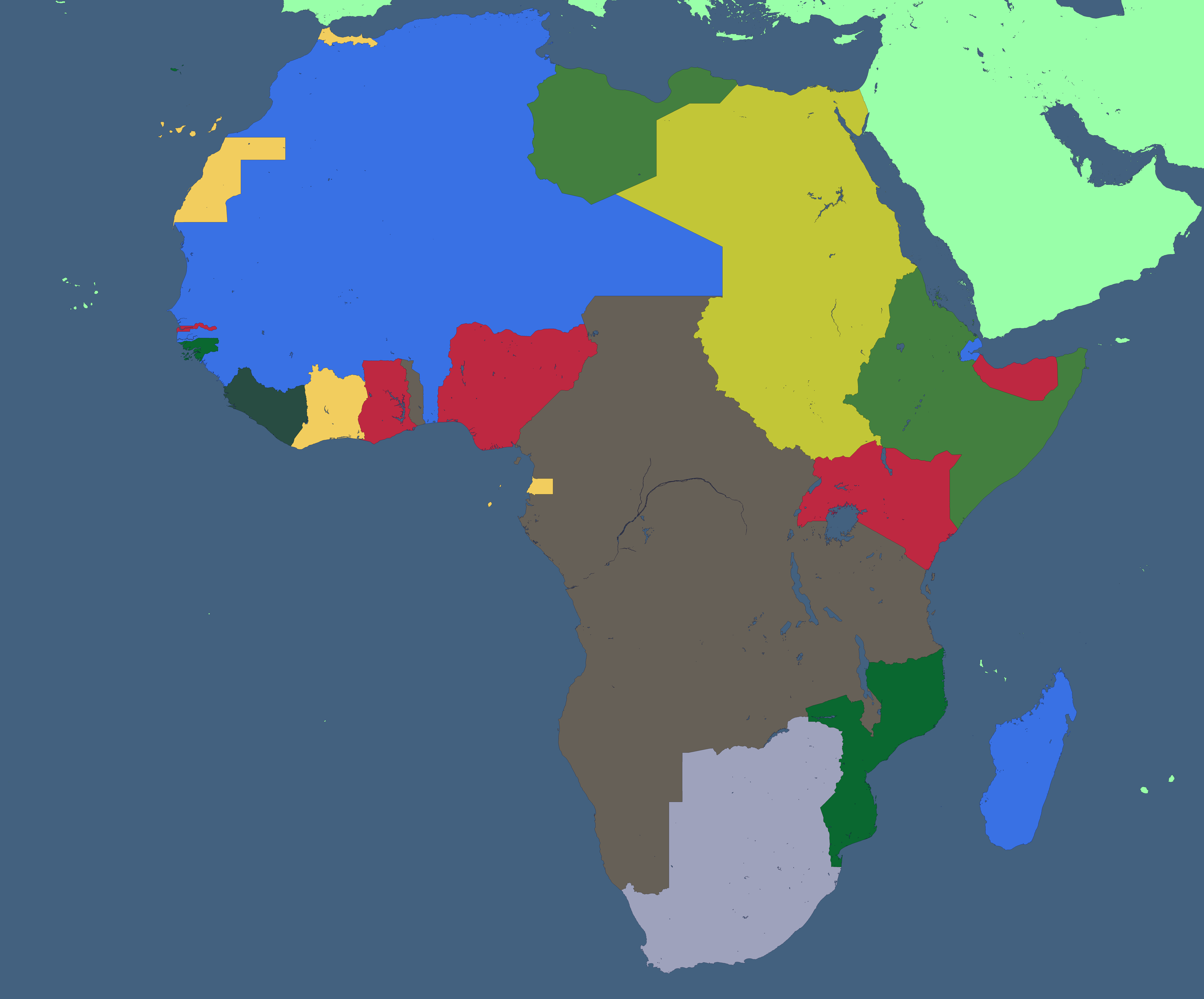 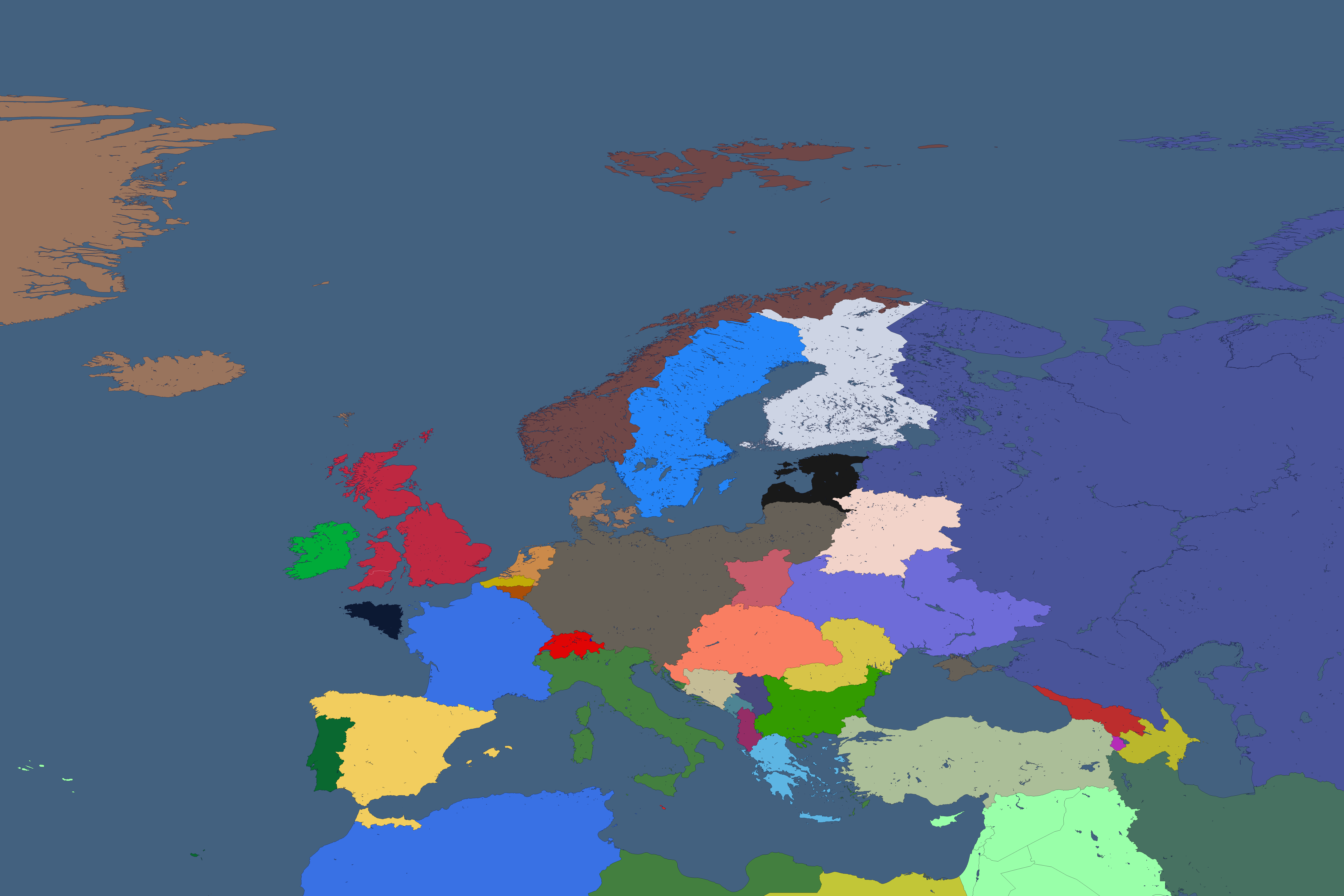 (in case you couldn't tell from the last two imagees, this is a Central Powers victory scenario, with Italy and the US joining them). 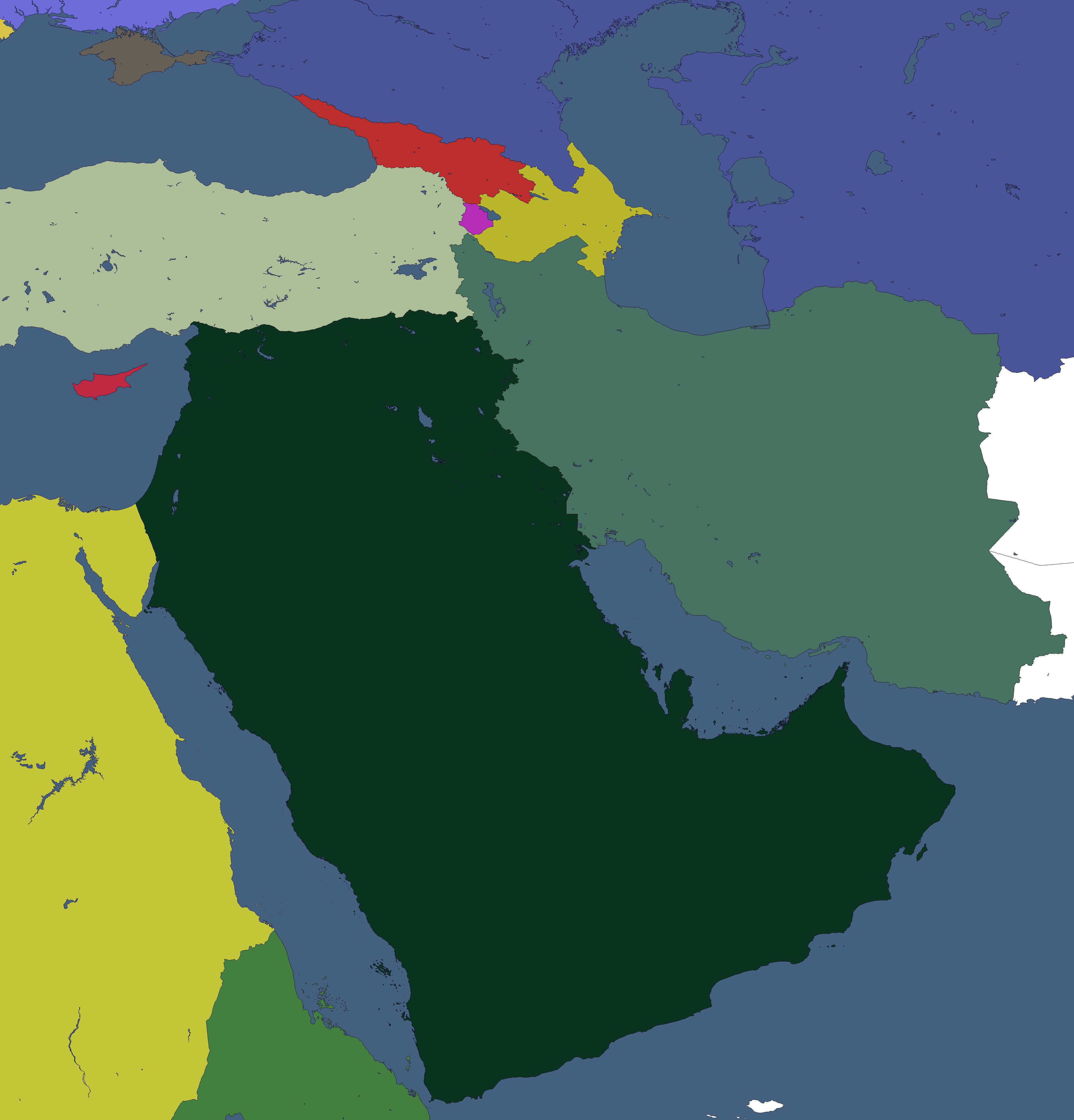 Please note that in the NA map, all the colored areas are actually states (excluding the Russian bit). SA has one British aligned nation that is independent, otherwise it is all the US

Some information regarding California (note that this is a copy/paste from when I answered someone's question involving the history of California and Utah on Discord):

California was founded very early on (it is one of the very first nations in the Americas to follow the US's lead in revolting), and signed up to the US fairly late (late 1800s). It has historic ties to Mexico and some to England (After it was clear that England was going to lose NA, they started trying to influence nations/regions like California, in order to have an at least minor presence on the continent). The ethnic makeup is about %50-%50 white aka "Californian" to something that could be considered a subset of Mexican aka "Californio" (these terms are the best descriptions to use, and not "Yankee", or "English", or "Mexican/Latin-American" (at least for those who are native born)). The white portion of the population is %50-%50 (these aren't exact of course) English to Yankee, I feel like the Yankee doesn't need to be explained, as that group tends to spread itself all over NA, while the English is a result of England increasing its influence in the region/when British Canada fell, some fled to California. Early on in its history, it was a "Mexican" country, which slowly evolved over time. California has Spanish and English both as the Primary language (aka they area equal in the eyes of the government, and most officials are bilingual). California is one of the only States to be given a special exception when it comes to war, in that if the US goes to war with the UK/England, then California isn't required to join if it doesn't want to (this is the primary demand they had when they joined the US). Governmentally, California is a Parliamentary Democracy, a lot like OTL European countries (I even tend to think of it like OTL Europe, but in America), meaning that they have a plethora of parties, and everything that comes with the system. They are a light federation, where each department has its own power, however they have no illusion of being independent, like how the OTL US states do.

(Same thing as above, but this time for Utah):

Utah was founded some time after the Mexican-American war, and some people call it one of the "Artificial States", which it shares with Oregon, and partially Texas, as they were not they're own thing before the US got the territory (it tends to be more Mexicans/similar groups that put Texas in that group). There was actually a very heated debate about whether that region should become Deseret, or whether it should become New Mexico (it being New Mexico would mean that it would culturally/religiously like the east coast states). New England/Columbia/Dixie were obviously in favor of it becoming New Mexico, while for the most part Louisiana/Mexico wanted Deseret, in order to not allow the "Yankees" to dominate the political structure of the US. This eventually led to a compromise, where it would be a toned down version of Deseret, now dubbed Utah in order to reflect the changes. Utah is highly religious, with Mormons being much more common than in OTL, and most of the rest of the population being some degree of Christian (There is even a decent Muslim population in Utah) (it should be noted that relations between the Abrahamic religions is significantly better than in real life, at least in Utah, although other religions do tend to be discriminated against more heavily). Utah is fairly well known for being the home of a disproportional amount of missionary missions, compared to the rest of the states/nations of the world. It is a federal system, much like the OTL US and the East Coast States. One of the big things about Utah's Provinces is that Diné is actually a Native-American province, with the Navajo being the leaders of the Province (and where the name is from). Many native tribes have been kicked out of the other states, and they were allowed to settle in Utah (most going to Diné). (I am considering making one of the Provinces into a Jewish Province, since the Jews can't have have an independent nation in Palestine, because of the Arabic nation that controls much of the Middle East)

South America so far (massive thanks to Colombus over on Discord, who made the more important geographical changes). Note that the massive green area is simply the incomplete area, and the red at the bottom is a British colony, and the only non-US entity in the Americas. 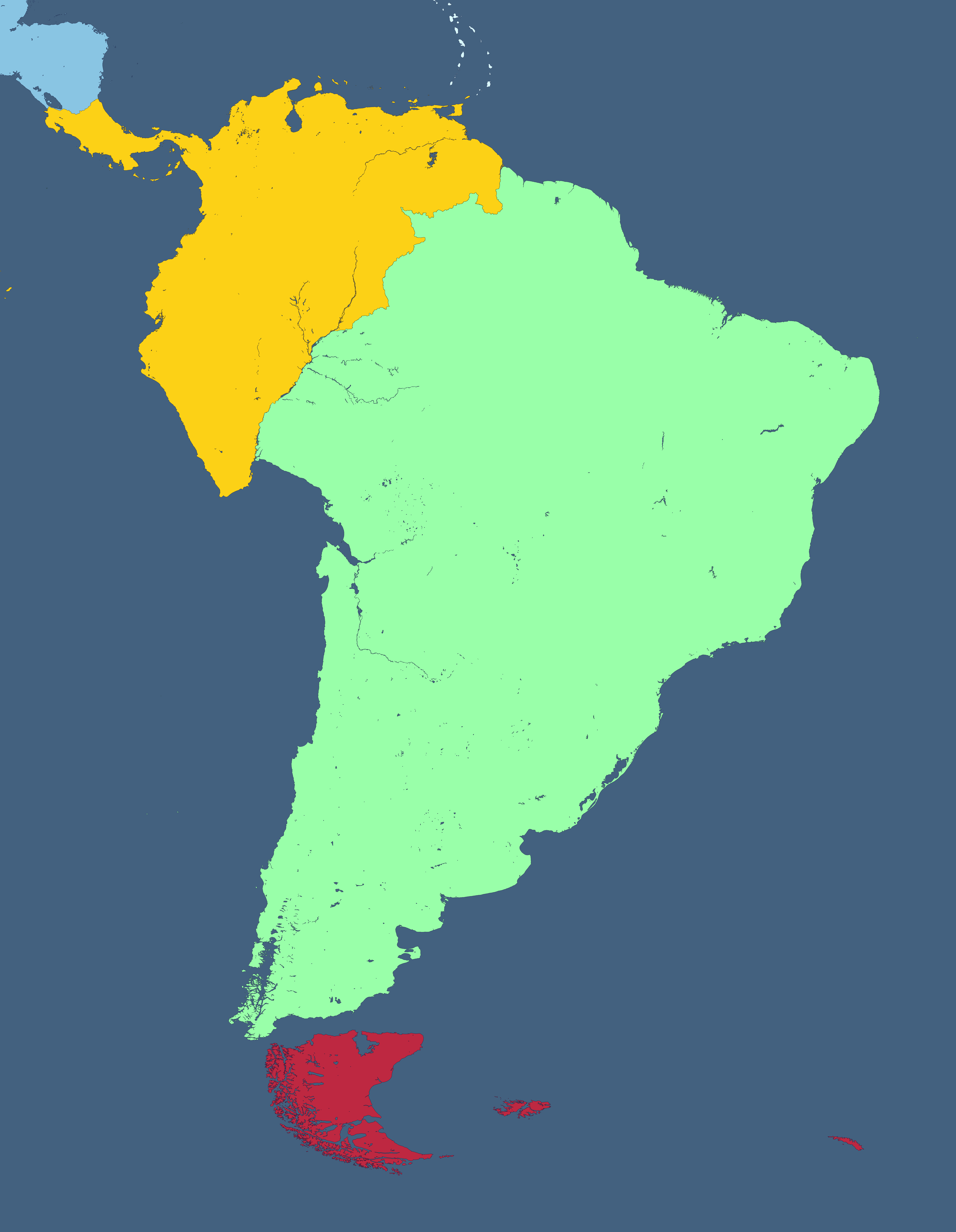