Cross My Heart, This Is My Crossbow: An Allohistorical Tale of Amerindian Arbalists

generalurist said:
This sounds very interesting. Google isn't much help, do you know where I could read up more on the use of mail armor north-east of China?
Click to expand...

A very interesting question. With regards to mail and certain Siberian and Kamchatkan natives, I've read about it or seen it featured in documentaries. I think one documentary I saw a while back, about an Aleutian and Kamchatkan people who did some seagoing raiding on other tribes, focused a bit on them wearing older mail armour bartered from abroad. There are numerous examples of mail popping up between China, Mongolia, Siberia and Alaska, and I can send you a whole list in a personal message, once I compile one. Mail wasn't necessary for my research here, at all, I just mention it in connection with the overland and Bering Strait native trade. 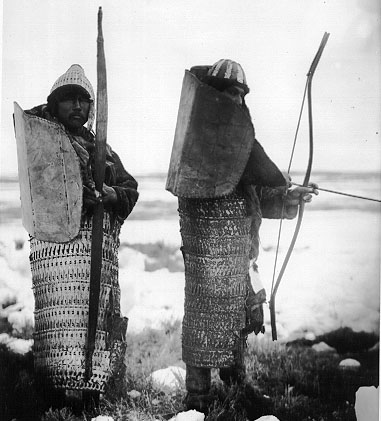 Two Koryak hunters in their native lamellar armour, photographed at the start of the 20th century

Most of the Siberian nationalities wearing home-made native armour were either wearing forms of padded armour or lamellar armour. The latter in particular was inspired, at least in part, by lamellar armour from central Asia and east Asia. Mongols had it, the Manchu had it, the Chinese had it, all the central Asian polities used lamellar as well. A very popular armour throughout Asia, and even some parts of eastern Europe. The fact that plenty of Siberian natives had their own versions - albeit often more cumbersome - doesn't surprise me in the slightest.

The native peoples of the Pacific Northwest used various padded armour forms or armour in the manner of a brigandine, with bark slats instead of steel plates. No evidence for lamellar armour there, as far as I know. You can read or watch more about these PN native armours and about similar Siberian native armours in the second Artworks and images section. Open the last spoiler and you'll find it among the resources there, under "2.)" and "Armour". Some Bronze Age Siberian native armours were built similar to the PN "bark brigandines" or European brigandines or jack-of-plates, but with carved bone and antler plates instead of wooden slats or small metal plates (of steel or similar). Native armours, outside of the "big and famous" cultures everyone always talks about, is a fascinating topic. I'm glad it's gaining more attention these days.

I think we've strayed a bit from the topic of this timeline. I wholeheartedly endorse anyone writing an interesting Siberian-themed ATL. Siberia is very untapped when it comes to alternate history, so doing something about its natives that doesn't involve Russians and Chinese and so on would be refreshing. Lands of Ice and Mice already did some pretty cool stuff for the Inuit, so native Siberians might deserve a chance at an interesting ATL as well. Armour wasn't a major topic I'd wanted to cover, despite some necessary mentions here and there. Whether Native American or Siberian or any other. If I ever delve into New World native armour (and its possible, occassional predecessors among older forms of Asian native armours), it's going to be in a spinoff story set in this timeline, but not sooner.
Last edited: Aug 29, 2020

I regret I know very little about crossbows, but I can safely say that this is an excellent timeline that I read through with intensity. Intelligent, thoroughly researched, precise and constrained in scope, this is *mwah* chefs kiss work.

Auricom said:
I regret I know very little about crossbows, but I can safely say that this is an excellent timeline that I read through with intensity. Intelligent, thoroughly researched, precise and constrained in scope, this is *mwah* chefs kiss work.
Click to expand...

Thank you kindly. I will still be working on some artworks for it this autumn/fall. Hopefully you'll find them just as engaging.

Also, I don't rule out this timeline might receive some spinoff stories in the future. Not only from me, but also from other members, if they show potential interest in the setting and write something that could reasonably fit into the established "canon". There might be more stories eventually... In the meantime, be sure to read the Appendices if you haven't, they include a good chronological overview of events.
Last edited: Sep 16, 2020
Threadmarks
You must log in or register to reply here.
Top
Top