Apus of the Ocean: A Timeline Concept

If you read the article, there is plenty of evidence that Andean seafaring capabilities were much more developed than usually thought.

In fact, the first contact between the Spanish and the Inca was with an ocean-going vessel, which surprised the Spanish because of its size and sophistication. Quoting a chronicler that came with Pizarro:

[The Spanish] captured a ship [raft] with as many as 20 men aboard of whom 11 threw themselves into the water. [Ruiz] put the remainder of the crew onshore except for three whom he kept as interpreters. He treated them well. The ship he took had a capacity of up to 30 toneles [25 metric tons]. The keel was made of canes [balsa logs] as thick as posts bound together with ropes of what they call henequen, which is like hemp. it had an upper deck made of lighter canes, tied with the same kind of ropes. The people and their cargo remained dry on the upper deck, as the lower logs were awash in the sea water. The ship had masts of good wood and lateen-rigged sails of cotton, the same as our ships, and good rigging with henequen ropes. It carried stone weights like barber's grinding stones as anchors.
Click to expand... 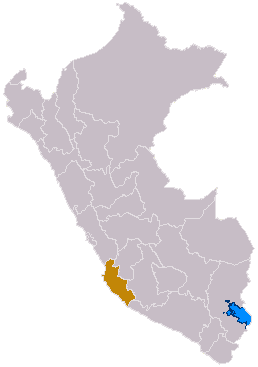 A great trading nation, they were very skilled seafarers.

The Chinchas were most famous for maritime commerce. Pedro Pizarro said that Atahualpa claimed that the ruler of Chincha controlled 100,000 sea-going rafts, undoubtedly an exaggeration, but illustrating the importance of Chincha and trade.[11] Voyages via balsa raft up and down the Pacific coast from southern Colombia to northern Chile, possibly as far as Mexico, were a long-standing practice, the trade largely being in luxury items such as worked gold and silver and ritually-important Spondylus and Strombus seashells.
Click to expand...

Even a tenth of the figure cited by Pizarro, even if most of it only included single-man "caballitos de totora" fishing boats, it still represents a major seafaring power.

Consider other Coastal cultures; the Sican, the Chimú. All with seafaring traditions, the Sican even having a legendary ruler who supposedly came from the sea (Naylamp: https://es.wikipedia.org/wiki/Naylamp)

Consider also the unproven, yet tantalizing possibility of Andean-Mesoamerican trade by the sea. There is inconclusive evidence, from the introduction of metallurgy in Mesoamerica, to some cultural similarities.

What does this all tells us? Of all the cultures in the Americas, the Coastal Andeans were the most skilled with seafaring.

I did had some more direct academic sources; I will post them later.

Around the 9th and 10th centuries, the Wari and Tiwanaku cultures start to decline, and much like OTL, the Andes are divided in a bunch of different cultures, states and cities.

Two things differ from OTL, though:
(let us ignore the very real possibility that Mesoamerican contact also most likely happened OTL; if it did, this TL assumes it was deeper and constant.)

(and yes, I do realize "Apu" is a Quechua term)

The island of Rapa Nui, OTL settled much later in the 12th century, is settled earlier here as a fishing outpost, much like other small Pacific islands, but they quickly become trading outposts with the Polynesians. There isn't much to trade in regards of material goods (though anything exotic, like birds of paradise, coconuts, seashells, etc. are appreciated) but there's something the Polynesians have that is required in the Andes; seafaring skills and boats.

These are required because the coastal lords of the Andes are getting more and more charmed with the exotic goods coming from Mesoamerica and elsewhere, and they want them faster and in better quality. Not even the cultures from the highlands can provide such a diversity of trade, and they are also interested. However, the richer cities of the lowlands resist conquest.

(Of course, the Coastal Desert of Peru is a remarkably fragile enviroment, and it is possible the development of these cultures might be nipped in the bud by mere enviromental collapse like it most probably happened several times in Andean history. Let's assume that they don't collapse, or it is not a crippling one.)

(Also, in the meantime *does a little handwave* several minor epidemics brought by Polynesian contact confer resistance to many diseases, and also make several changes in Andean leadership and society.)

Mesoamerica, of course, changes a lot with all this ruckus. South America also changes. The cultures of Ecuador and Colombia become exporters of much needed wood for better ships. The Mapuche and other Patagonian cultures are connected to the Andean cultural world. Even in the Paraná and Paranaguazú (the Amazon), advanced raft techniques accelerate the rate of trade for the diverse cultures in the interior. And of course, the Pacific is changed forever. Mixed Andean-Polynesian traders become bolder in their quest for more prizes for the lords in the coast. The islands become city states, and the rafts travel farther and farther...

The Andes, Mesoamerica, Polynesia, and the rest of the Americas are united together in a trade system.

It isn't a tight system. For the average noble in Chan Chan, Lake Texoco is as far away as Paris is from Dehli. But it represents a major historical revolution, comprable to the Greek colonization of the Mediterranean and the Silk Road in Eurasia.

As I've said, hybrid Polynesian-Andean cultures travel farther, and farther. The Pacific is a gargantuan ocean, but their ships are reliable, fast, and increasingly bigger. They eventually reach the rich cultures of Indonesia and Southeast Asia, and rumors and scattered goods from strange realms across the Ocean reach the courts of the Andes and Mesoamerica. This only encourages seafarers to go even farther...

The Ciquic of the Chimú Empire, the largest and richest state of the Andes, is increasingly curious about the strange goods that come from far away, but is also quite disturbed about the wild tales of huge cities and strange cultures beyond the ocean. Could be this the legendary land of Naylamp, the mythical founder of the Sican?

He orders an expedition to consider the possibility.

It is a long, long trip. But the seafarers have had centuries of experience by now, and are bold if nothing else. Jumping along the island-cities of the Pacific, they reach the exotic ports of Nusuntara and have an audience with the ruler of Dai Viet. Impressed with the things they've seen, they're encouraged to travel further...

A strange vessel sails the river Yangzte. It is of a more rustic build than the local ships, and is surely weathered by a long voyage, but it no doubt evokes official presence with the elaborate and colourful patterns on its sails.

The strange traders? envoys? both? Get the curiosity of the people of Nanjing with their copper skin, their exquisite cotton clothes, their feather decorations, and their copious gold jewlery. They whisper among each other as they admire the strange city and its customs... and riches.

It is a cold morning in what is October 12th, 1492 in the Christian Calendar.

A representative of the Ciquic of the Great Chimú Kingdom, the Chosen of the Moon and the Overseer of the Ocean, requests an audience with the one who calls himself the Son of Heaven.
Last edited: Mar 27, 2021

As my people say, more por favor. I want more!

Thank you!! This is more of a loose concept more than a concrete timeline, but my idea is to discuss it here and at least create a map and scenario about it.