Donor
This is so cool! I eagerly look forward to see where you will take this!
Perhaps I'm reading into something that isn't there, but am I correct in assuming that Japan intend to fracture China into 3-4 successor states?
The Qing, the ROC, a cantonese part and something else?

Uff Da the optimist said:
This is so cool! I eagerly look forward to see where you will take this!
Perhaps I'm reading into something that isn't there, but am I correct in assuming that Japan intend to fracture China into 3-4 successor states?
The Qing, the ROC, a cantonese part and something else?
Click to expand...

Right now, the Japanese are just interested in keeping China from being one sovereign entity. Prime Minister Inoue thus far has a vested interest in keeping international interest in China divided, and to start cultivating a loyal Japanese ally from one of the factions--in this case, he has chosen the young Puyi, whom is still developing, and is a proper candidate to be molded by Japanese constitutionalism.
Map, September 1915

This is what the world looks like in September 1915.

The Central Powers are doing alright--Austria is beating Serbia, but is losing ground in Galicia-Lodomeria to the Russians. Germany is advancing in both theatres, and has cut off a large number of Belgian and French troops near Calais, but the French are fighting robust, and attempting to break the German salient. In Afro-Asia, the Ottomans have occupied Kuwait and have made advances in the Sinai, Iran and Russia. Germany's African colonies are almost all gone, as the Entente wreck havoc across the territory. France's lackluster African warfare has lead to Britain taking the lead in seizing German colonies, though Belgium is beginning an invasion of Tangikniya in order to get some of the spoils at the end of the war.

China is in an unstable state. The Kuomintang is active once more in the South, whilst the Japanese have expanded their influence in the Shandong region, and in Manchuria. Yuan's rule is as precarious as ever.

Germany has completely flopped in Asia, as Japan has occupied all their holdings, save New Guinea, which Australia rapidly occupied at the outbreak of war.​

Will the outcome of ww1 change??

I like that map; especially those pink bits in Africa.

Oh boy are you going to love this timeline.

TheHandsomeBrute said:
Will the outcome of ww1 change??
Click to expand...

I'm hoping for Central Powers victory, or America at least never joins the war, and the war ends with a white peace.

Historyman 14 said:
I'm hoping for Central Powers victory, or America at least never joins the war, and the war ends with a white peace.
Click to expand...

Heck, have Wilson lose re-election, that'd probably get the US out of WW1 AND allow one of my least favorite presidents to leave the stage.

Knightmare said:
Heck, have Wilson lose re-election, that'd probably get the US out of WW1 AND allow one of my least favorite presidents to leave the stage.
Click to expand... Fine, it's be less morally grating entering the war with him as POTUS.

if you want a german victor you could look at other timelines for inspiration, A Shift in Priorities, but i will be interested on how you will make a ww2 with a german victory

Banned
I haven't decided yet, what I want. One of the most standing-out alternate history tales of a WW1 Central Powers victory is actually Kaiserreich: A Hearts of Iron Mod, which I think has a pretty interesting tale of what happens. I probably won't emulate it in detail, but I did once try a 'Germany wins WW1' timeline called Peace Without Victors, but this'll be a bit different.

How about keeping World War I as OTL; it'd be interesting to see Japan against Axis Germany...

Sakura_F said:
I haven't decided yet, what I want. One of the most standing-out alternate history tales of a WW1 Central Powers victory is actually Kaiserreich: A Hearts of Iron Mod, which I think has a pretty interesting tale of what happens. I probably won't emulate it in detail, but I did once try a 'Germany wins WW1' timeline called Peace Without Victors, but this'll be a bit different.
Click to expand...

I have tried playing darkest hour but I always seem to walk towards Hoi3 BICE so i am unfamiliar with the mod, whatever you do just make it interesting and i am all in.
5. October 6 Incident 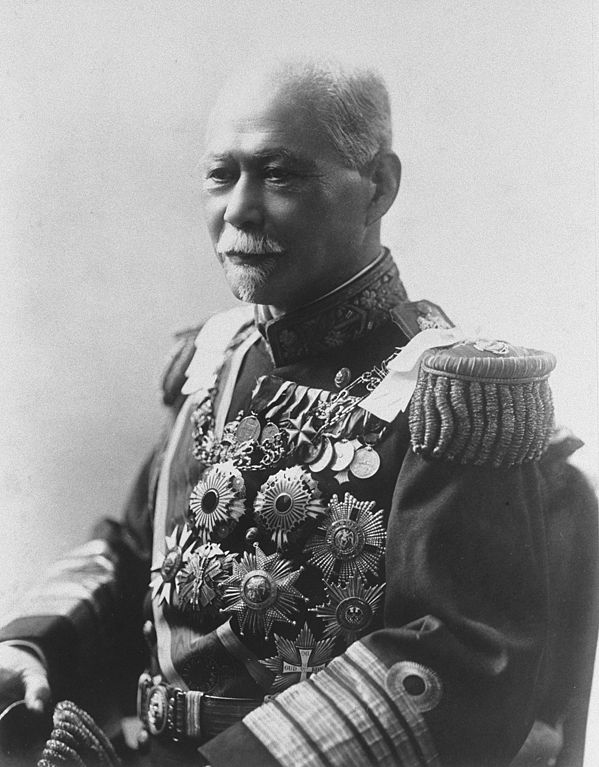 五. 十・六事件
Chapter Five: October 6 Incident
​
The morning of October 6, 1915 marked a significant evolution in the Japanese Empire’s politics, military, and national integrity. For months, the civilian government had been chipping away at the temporal power of the armed forces—through the reformation of how the Korean and Taiwanese Governor-Generals worked, and through the refusal to allow for the appointment of an active military officer to the office of Prime Minister—the new Prime Minister, Minobe Tatsukichi, was a known enemy of the Imperial war-machine’s influence.

The nationalists had been leading outbursts of violence in the months of the governance of Prime Minister Inoue and now, Prime Minister Minobe. With Minobe’s appointment, they felt ready to act. In the days before the October 6th incident, several high-ranking Japanese officers in the Army planned to focus on a few key items

First, the assassination of enemies of the Empire and those who stand in the way of kokutai. This meant that the Prime Minister, whom was a major proponent that the Emperor was an organ of the state, was the prime target.

Secondly, the reversion of all major reforms put into play since the ascent of the Taisho Emperor in 1912; this included the reforms to the Korean and Taiwanese colonies, which would be placed under direct military rule, as they were de facto before.

In the morning of October 6th, the plot went into action. The Army staged a coup d’etat in Taipei, Gyeongseong and in Tokyo. In Gyeongseong, they seized the Governor-General’s mansion—the Governor-General, fortunately, had been in the Northern Korean countryside at the time, and escaped death. Upon hearing of the seizure of power in Gyeongseong, Governor Takahashi did not return to Gyeongseong, but instead remained where he was with loyalist military forces.

In Taipei, the Governor-General managed to barely escape with his life. The small civilian boat he was on managed to slip through the early morning, and he arrived on Okinawa safe—the Army thereafter occupied the Governor-General’s office in Taipei as well. It was not long after that the office came under siege from loyalists.

In Tokyo, the largest concentration of Army traitors seized the Ministry of War, arresting scores of officers whom did not join their coup d’etat—they hoped to purge the Army of any dissenting officers, and convince the Navy to join them to force the Emperor to capitulate to their demands.

They attempted an encirclement of the Prime Minister’s house, but failed, as the Prime Minister had already fled after early news of the rebellion in Gyeongseong and Taipei had become clear. Overzealous members of the rebellion attempted to assault and force their way into the Imperial Palace to deliver their ultimatum to Emperor Taisho. However, upon entry, they were fired upon by several police-officers. One overzealous officer launched a small firebomb at the group of police officers and started a fire within the Imperial Palace. The quick spread of the fire eliminated the ability for the Emperor to reach safety. In the chaos, the Emperor attempted to affect his own escape from the burning Palace by climbing out of a second story window. However, the window-sill, still wet from a previous night’s rain, caused the Emperor to slip. The Emperor fell out of the window and fell on his head, knocking His Imperial Majesty out cold.

The rebellious soldiers were driven out of the Imperial grounds, and the Emperor was discovered shortly afterwards. News of what had happened to the Imperial Palace (now half-burned out) and the Emperor spread across Japan thanks to telegraph, and soon, members of the rebellious soldiers’ ranks were turning on themselves, and fighting soon broke out between those whom were reluctant accomplices, and those whom were die-hard militarists.

The turning point was when the rebels attempted to seize the Diet building and arrest those inside. Taking up weapons, many police officers, loyalist soldiers, and others, gathered at the Diet, and traded fire with the rebels from their barricades. Soon, more loyalist officers arrived and started attacking from the flank.

The military coup d’etat failed after the Ministry of War was reclaimed by the Loyalists. The ring-leaders of the coup were arrested, tried, and sentenced to death in the same day. That same afternoon, Prime Minister Minobe ordered an investigation into both branches of the Armed Forces to verify that there were no more plotters and conspirators in their ranks.

Public trust in the armed forces was significantly damaged by their foolish venture that day, and hundreds of soldiers, officers and people with militarist and nationalist sentiment were arrested and imprisoned, or even executed. Yamamoto Gonnohyoue was named the ring-leader of the plot, and was executed on October 10th. The Emperor slipped into a coma induced by severe neurological trauma and pre-existing condition. With a regency needed, and none of his sons of age, someone new had to be found.

They enlisted the aid of Ōyama Iwao, an elder statesman and, ironically, one of the founders of the Imperial Japanese Army, to serve as Sesshou. While he was supportive of the genrō and against democratic politics, he was also very reserved, and did not put his interests before that of the state, and therefore pledged to serve as Regent and do his job with impartiality.

Whilst the Emperor’s children had not been involved in the coup, a great amount of public suspicion encircled both Michi and Chichibu, as they had been listed in the rebel’s demands as ‘replacements’ for the Emperor, should he have refused their demands.

While Michi would still inherit the Chrysanthemum Throne upon his father’s death, there was little to no enthusiasm for the Emperor to die any time soon.

The regency of Ōyama Iwao lasted a brief two months. On 2 December 1915, the Regent died of a heart attack. The council then convened, and anointed Hirata Tosuke as Sesshou, which is where he would stay until the Regency dissolved in 1919.​
Last edited: Feb 26, 2017

Sakura_F said:
What is it with Chinese women of power and being bat-shit insane? Her and Madame Mao come to mind...
Click to expand...

I wouldn't say Cixi was essentially insane, she was just power hungry. While I haven't read said book, people seem to think that June Chang’s Empress Dowager Cixi is a good book to understanding Cixi.